I’ve been told that GANTZ was a good movie. I was looking forward to it because I like the leading actors- Matsuyama Kenichi, and Ninomiya Kazunari. 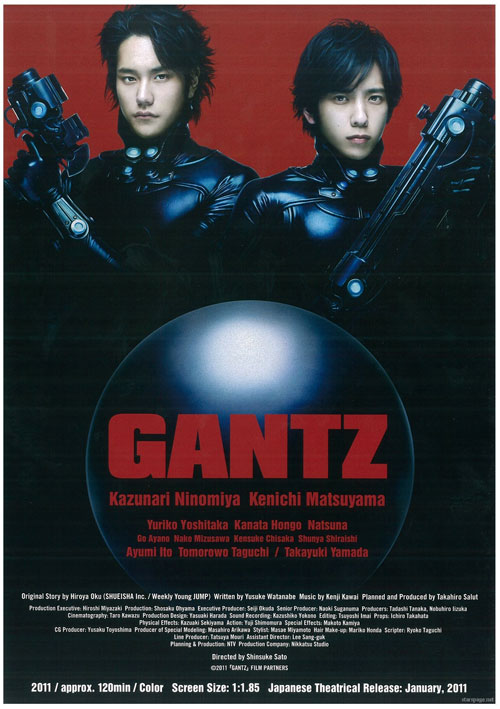 The story follows Masaru Katou (Matsuyama Kenichi) and Kurono Kei (Ninomiya Kazunari), who were once friends in primary school. Kei would always protect Katou from bullies. As the movie opens, a drunken man falls on the tracks at a train station. Katou rushes to save the drunken man from being run over by the incoming train, but gets stuck there himself. Kei reaches out a hand to try to save him, but he loses balance and they both get hit by the incoming train—or so they think.

When they open their eyes again, they are in a strange room with a black ball in front of them. And strangely enough, they are still alive and unhurt. There are other people in the room, and they try to come to terms with what exactly happened to them. Then all of a sudden, a hand appears in mid-air, and a naked girl materializes in front of them. Being the gentleman that he is, Katou covers her up, and stops a yakuza from taking advantage of her.

Before long, the black ball starts up like a radio and tells them that their lives do not belong to them anymore, and instructs them to hunt down an alien. The ball bursts open and suitcases with their names and guns pop out. Inside the ball, a seemingly comatose man is attached to the sphere called GANTZ.

Kei quickly realizes that the suits GANTZ gives them are quite useful. You don’t get hurt, and it lends you extra power, as he discovers in their second encounter with an alien. Once again, he was able to save Katou and the girl (Kishimoto).

Back in the real world, Kei continues attending his classes at his university. Several classmates comment on how Kei lacks presence, but they are interrupted by Kojima Tae (Yoshitaka Yuriko), who tries to approach Kei. She shows him a manga that she drew about an ordinary boy, who was all of a sudden given powers. At this point, Kei, who woke up from the previous mission with his GANTZ suit, has discovered that the suit also works in the real world, and immediately relates with the hero. He then realizes that he has been given the ability to shine, to be the strong one to defeat their enemies. However, he concludes this by rationalizing that the weak are only good at running away, and it is up to strong people like him to save them. Thinking this, he puts on his suit again, and eagerly awaits the time when GANTZ has another mission for him.

Meanwhile, in Kishimoto (Natsuna) goes to Katou’s house to return the coat that Katou used to cover her. Here, we learn that Katou lives alone with his younger brother, and that he killed his drunken father who used to beat the younger brother up. We also learn that Kishimoto killed herself after her boyfriend cheated her. Together, they agree to fight better in the next mission, and work hard so that everyone will be able to go home.

Back in the room, Katou tries to warn the new arrivals of the horrors that will come, but Kei tells him not to bother explaining, and reassures Katou that he will always protect him. He taunts Katou that in reality, Katou wants be able to go home and return the real world alone.

During the mission, Kei valiantly and arrogantly fights and destroys their targeted alien, telling Katou that he can do it by himself. However, they still haven’t returned, and one of their companions comes out of the building they’re in front off and dies. Kei gets wounded, and Katou tries to defeat the new alien who takes the form of the Thousand-faced goddess, with more than twenty arms that wield swords. Kishimoto tries to save Katou and is mortally wounded. Katou, with the last of his strength, tries one more time to fight, but, in the end, gets mortally wounded.

In despair, Kei fights the new alien, and the last alien, a Buddha that grew to enormous heights. However, Katou isn’t with them when they return to the room. GANTZ records their scores and Kei asks GANTZ what happens if they reach 100 points. The 100 point menu contains two choices—either have their memories erased and return to the real world, or revive someone that they love.

Back in the real world, Kojima Tae tries to interest Kei in the next instalment to her manga, but Kei, reeling from the death of his friend walks to the train station where everything started. A kid’s cap falls on the tracks, and he goes down to pick it up. As if it were a de ja vu from the opening of the movie, a train starts to come in. Tae reaches down to pull Kei up, and at the last minute, he grabs her hand. On the platform, Tae confesses that she likes him, so he cannot die. Kei wakes up from his daze and visits the younger brother of Katou.

The next scene shows two other survivors along with two new arrivals in the strange room with the sphere. Kei appears and tells them that they have not died, and together, they will work hard to achieve 100 points.

What I found interesting in the movie were the characters of Katou and Kei, most especially Kei’s character. Katou, at the beginning of the movie was called a hypocrite. At first, you’d wonder why, because he seems to do the most gentlemanly thing all the time. However, when push comes to shove, he cannot deliver. He want s to protect others, but when the time comes, he can’t. His journey comes full circle when he realizes that this inability to be able to protect others.  I guess this the reason why he admires Kei so much.

The Kei that he knows and remembers is the Kei that protects others from the weak. However, Kei has grown up into a rather passive person, who doesn’t act that way anymore. Which is why, he (Kei) didn’t even budge when Katou was trying to save the drunken man on the tracks.

However, being in those GANTZ missions allowed Kei to shine and be that same person again. However, he let it get to his head. That he is the only strong one there, and that he doesn’t need anybodies help. Kei, who is a nobody in the real world becomes a ‘somebody’ in the GANTZ world. However, this ideology of his gets changed when Katou dies. He learns that as he has been given this chance to shine, and to be strong again, he should indeed use his newfound abilities to the best that he can, but for the right reasons. To protect the weak not just for self-satisfaction, but for the sake of everyone, so that there will be no more deaths, and in doing so, they will be able to get released from this never ending cycle of missions, and for Kei’s part, to be able to revive his best friend back to life. This journey of realization of both main characters is what makes this movie so interesting.

Matsuyama and Nino are perfect for their respective roles, and are able to give us the depth of emotion and they really show the journey that their characters go through really well. Yoshitaka Yuriko is okay, not as amazing as Nino and Matsuyama, but okay enough for her part. For me, Natsuna, who played Kishimoto, was the one that I didn’t like in the movie. For me, it felt as if she had just one or two expressions throughout the entire movie.

Anyhow, I’m looking forward to what will happen to Kei and co. in the sequel-PERFECT ANSWER, especially after that amazing twist at the very end of the movie.