First and foremost, I would like to apologize for neglecting this space for several weeks. During that time,  I decided to take a short hiatus, mainly because I needed to rest, and also so that I could catch up on watching some shows which I have been neglecting as of late. So, let’s get the ball rolling with MARVEL’s “Doctor Strange”.

Around a year ago, MARVEL, in their various interviews and press junkets, told the world that the upcoming “Doctor Strange” film would be a gamechanger as it would be very different from the other MARVEL Cinematic Universe films we have gotten used to.

Because of this and the stellar cast that they had gathered, expectations were riding high, especially as “Captain America: Civil War” raised the bar for superhero and blockbuster films. Thankfully, MARVEL did not disappoint as “Doctor Strange” gave us more than what was expected, and was indeed a gamechanger for the MARVEL Cinematic Universe, what with the stunning visual effects that were used in the film.  They managed to deliver as promised, and that and more is what they gave.

WARNING: MAJOR SPOILERS FROM HERE ON OUT!

“Doctor Strange” tells the story of Doctor Stephen Strange (Benedict Cumberbatch), a self-centered and egotistical yet brilliant neurosurgeon, who ends up losing the ability to use his hands after a tragic car accident.

Because of this, he tried everything, medically and scientifically speaking, in order to get his hands to work again. In the course of his research and recuperation, he ends up distancing himself from his colleague and ex-girlfriend, Christine Palmer (Rachel McAdamss); and discovers that Jonathan Pangborn (Benjamin Bratt), a paraplegic, had gotten healed after a mystical journey to Kamar-Taj.

Desperate to get his hands healed, Strange embarks on a journey and discovers Kamar-Taj, where the Ancient One (Tilda Swinton), and her disciples, such as Karl Mordo (Chiwetel Ejiofor), practice and study the mystical arts.

The two become mentors to Strange, who, becomes a dedicated student, and rapidly learns one technique after the other, including, using the Eye of Agamotto, which, we later learn contains the Time Gem, one of the Infinity Stones.

Strange then ends up getting caught up in a battle between them and a former brilliant student, Kaecilius (Mads Mikkelsen), who summon Dormammu of the Dark Dimension so that he could bring eternal life to everyone. Also, he went against the Ancient One after learning that she sustains her life force by drawing power from the Dark Dimension.

Strange then ends up in the New York Sanctum (oen of the sorcerer’s bases), where he fights Kaecilius off, and gains the Cloak of Levitation, which had taken a liking to him.

Injured, he ends up returning to the hospital where he worked at, and while there, used an astral projection of himself to help Christine operate on him before fighting with one of Kaecilius’ zealots in the astral plane.

Another mind boggling, “Inception” meets kung-fu fight then breaks out in New York City, and the Ancient One gets mortally injured. Before she dies, she imparts one last life lesson to Strange, who, like Mordo, have been reeling at the revelation that she sustains her life via the Dark Dimension. 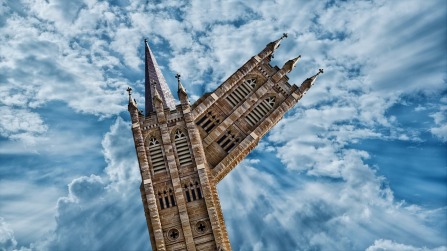 Mordo and Strange then head to the Hong Kong Sanctum, where they fight with Kaecilius and his followers, and end up losing the fight.

Strange, who is willing to bend the rules then uses the Eye of Agamotto to turn back time, and to trap himself and Dormammu in a permanent time loop so that he could bargain with Dormammu to leave the earth alone. In exchange, Dormamammu will claim the Kaecilius and his followers.

Afterwards, Strange decides to continue being a sorcerer and to protect the world from over dimensional and mystical threats from the New York Sanctum, while Mordo, ends up  turning his back on them forever, as he cannot be flexible enough to condone how the Ancient One bent the rules a little bit.

In the post-credits scenes, Mordo visits Pangborn and removes his magical abilities, claiming that the problem was there were “too many sorcerers”; and at the end, Strange, now wearing gloves, agrees to help Thor (Chris Hemsworth), look for his father, Odin (Anthony Hopkins), after telling Thor that he is keeping an eye on the troublemaking Loki (Tom Hiddleston).

This movie not only had a great cast and score, but it really outdid itself in terms of visual effects. They took a page out of Steve Ditko’s “Doctor Strange” comics with the psychedelic visuals, and the mind-boggling action sequences were better than “Inception”.

I know that there was some backlash about the casting of Tilda Swinton, as the Ancient One is an Asian male, but I think that this casting worked well, as Swinton has an androgynous yet ethereal look that makes her perfect for the role.

I liked that McAdams’ role was downplayed, but equally important at the same time. When she was first cast, there were rumors going around that she would be playing Clea, a sorceress who later became Strange’s wife. However, here, she is one of MARVEL’s “Night Nurses”, a title to which Rosario Dawson’s Claire Temple also belongs to, albeit in the Netflix MARVEL Universe. I am glad though, that she was not Clea, and that her presence, especially in the hospital scenes, somehow grounded the audience.

Kaecilius was not a strong villain, like all the MARVEL Cinematic Universe villains (maybe except for Loki), but Mikkelsen was on point, and served his purpose well.

This film, aside from its stunning visuals, also had a lot of heart, like “Ant-Man”,  and in a sense, this film really connected with me on a personal level, and in particular, I liked seeing the two different reactions that Strange and Mordo had when it was revealed to them that the Ancient One also drew some power from the Dark Dimension.

Sometimes, like Strange, I get stung a little, but I gather enough courage to bend the rules a little bit in order to achieve something good. However, most of the time, I am like Mordo, often times inflexible when it comes to bending the rules.

All in all, “Doctor Strange” truly ushered in a new era in the MARVEL Cinematic Universe, and I cannot wait as to where it takes us next.

Also, it makes me even more excited for “Captain Marvel”, especially effects wise.

Guardians of the Galaxy

(I have never seen the most recent Hulk movie, so I cannot rank it with the others).