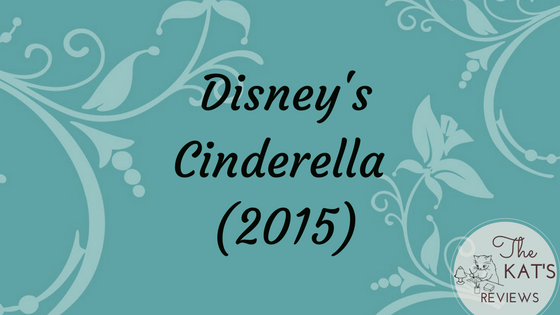 After watching the live action version of “Beauty and the Beast”, which I did love, I decided to go back and finally watch the Disney live action version of “Cinderella” (2015), which I have not seen yet until now. I had heard really good things about it, but the Cinderella story really never appealed to me as much as the other animated Disney films, and it wasn’t something that I was scared of seeing as a live action film either. However, “Beauty and the Beast” sort of changed my mind about that, and I became willing to give the other live action adaptations such as “Cinderella”, “Maleficent”, and even “Pete’s Dragon” (although I am nervous about this one as this was a childhood favorite of mine), a try.

By now, the story of Cinderella has already been retold over and over again, and there have been countless of remakes and the like of this classic fairy tale, so there is really nothing to spoil about the story. (My favorite one up to this point had been Drew Barrymore’s “Ever After”.) Also, this means that it might also be harder for a studio to keep the story and the film refreshing so that it can cater to both the parents and for the kids who will see it. And in Sir Kenneth Brannagh’s hands, this live action adaptation of “Cinderella” was handled well, and brought back the magic for me to this story, while adding and enhancing some little plot points and loopholes as well.

Needless to say, I liked the film even more than the original animated film, and I actually liked the fact that it wasn’t a musical.

(I am opting not to put a spoiler tag on this because I doubt that there isn’t really anything I can spoil at this point as this story has been retold so many times before.)

I loved the music, the attention to detail in everything from the dresses to the knick knacks, and costumes; and I loved how they added a little bit more depth to these classic characters.

James managed to portray Ella as someone who is a kind and beautiful, without being too annoying,  and she also had an air of regality in her. Blanchett was awesome as Lady Tremaine, and I’m glad that the film managed to make her a little bit more human than in the animated film. Madden definitely has experience playing a prince of sorts thanks to his stint as Rob Stark on “Game of Thrones”, but he and James have such good chemistry together, that you definitely believe their romance, which, was expounded more on this time around.

Aside from that, you have the mice, with some changes, like Jaq is now Jacqueline, and they don’t really talk too much or help Ella too much; and I’m glad that they kept their interactions with Lady Tremaine’s cat, Lucifer, even though it was kept at a bare minimum.

I also like how they kept the color motif of the two stepsisters from the animated film- Anastasia (Holliday Granger) was wearing yellow green, like her animated counterpart; and Drisella (Sophie McShera),  was mostly in pink or pink purple.

I like the addition of more of a backstory for Ella’s parents, and I DID NOT realize that Hayley Atwell was Ella’s mother until the credits rolled.

Helena Bonham-Carter’s narration was well done, and I liked her as the old lady version of the fairy god mother. I loved the entire transformation sequence, especially when she transformed Ella’s dress, and the fact that she said “Bibbity-Bobbity-Boo” as she did so, but I felt like her actual performance as the fairy god mother was a little bit Johnny Depp-ish at times. However, I did like that she told Ella that she would enchant her stepfamily at the ball to not recognize her, which, for me, baffled me to no end in the original film.

There were some moments that I was really reminded of the animated movie, such as the part when Anastasia was singing (dreadfully, I might add); and when poor Ella was weeping by the bench. I also liked how they kept the first version of her dress to be pink, just like in the animated movie.

And yes, I did get chills during some parts of the movie, and I did feel bad for Ella at times, which, is a good thing, especially in a story that has been told over and over again.

All in all, I was really impressed with how they adapted this film into a live action adaptation, and I have to say that I like this version more than I liked the original animated film. Also, I am glad that James’ Ella is a heroine that many young girls can look up to, especially as the film gave her more depth, strength and spirit.

(I will probably NEVER watch the Alice in Wonderland sequel.)