As usual, whenever one month ends, I begin to think ahead and plan what I will be concentrating on for the upcoming months. 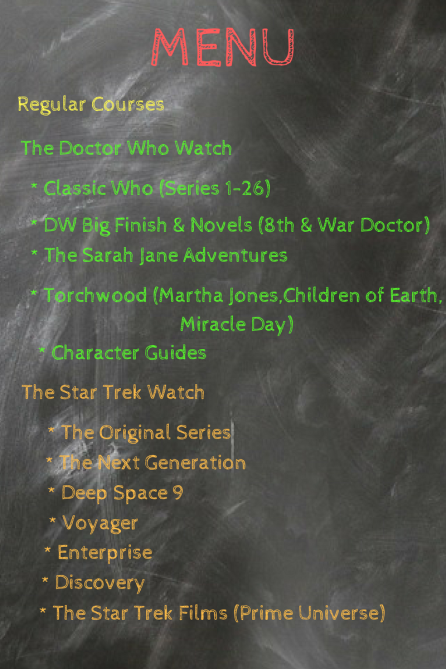 The Regular Courses are what I’ll be mostly focusing on. For the rest of 2017, we will be finishing up the “Doctor Who” franchise. This will include Classic Who, “The Sarah Jane Adventures”, the Martha Jones episodes of “Torchwood”, as well as “Torchwood” Series 3 & 4, and the Big Finish Audios and books I can manage to get for the Eighth Doctor (Paul McGann) and the War Doctor (John Hurt). I will also be doing character guides for each Doctor and companion, and hopefully, I’ll be able to talk about the different incarnations of the Master and Davros somewhere down the line.  (I decided not to tackle “Class” for now, as I’m not hearing a lot of great things about it. I may also end up reviewing particular “Doctor Who” novels and Big Finish stuff in the future as well.)

For my Classic Who watch, however, we will be beginning with the Fourth Doctor (Tom Baker), as I actually started watching his essential episodes sometime  last year. Then, we will move on to the Fifth Doctor (Peter Davison), Sixth Doctor (Colin Baker), Seventh Doctor (Sylvester McCoy), Eighth Doctor (Paul McGann), and the War Doctor (John Hurt). Afterwards, we will delve into the first three Doctors, then from there, move on to “The Sarah Jane Adventures”. I will be delving into “Torchwood” after “The Sarah Jane Adventures”, but only on particular episodes, as well as Series 3 and 4.

The beginning half of 2018 will mostly be dedicated to my “Star Trek” watch, in which I will either be watching for the first time, or rewatching, the shows and movies in the Prime Trek Universe. Once again, this will also be complete with Character Guides on each captain in each show.

In between all of that, I will be reviewing “MARVEL’s The Defenders”, and “MARVEL’s The Punisher” once they are released on Netflix.

I will still be doing movie reviews, and I will also be having what I call ‘Animation Breaks’, in which I will review either a Makoto Shinkai or Studio Ghibli film. These ‘Animation Breaks’ started with me reviewing Hosoda Mamoru films earlier this year, and as I do also want to be able to review some animated television shows in the future as well.

So, I hope that you will continue to enjoy your stay at The Kat’s Cafe, and please, if you have any suggestions on what else I should cover, please feel free to let me know!

See you all next Friday, where we will go into our first “Animation Break” with Makoto Shinkai’s “5 cm Per Second”.