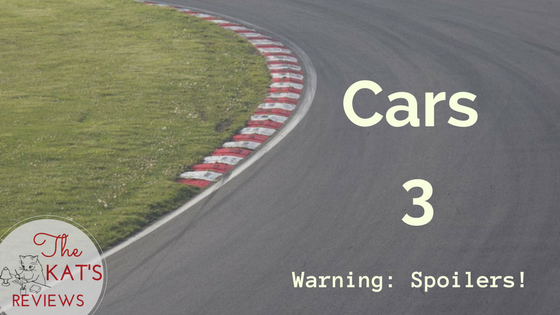 To be honest, I only saw a few clips of “Cars 2”, and based what I had heard about it and what I did see, I was glad that I stayed far away from it. Also, because Mater (Larry the Cable Guy) is my least favorite PIXAR character of all time. However, the initial teaser trailer and the subsequent trailers for “Cars 3” got my attention as it seemed like they were going to re-focus the movie back to Lightning McQueen (Owen Wilson) and racing, and I became curious as to what direction they would take with this installment in the franchise. Of course, as this is a children’s movie, they didn’t go too dark, but it was surprisingly poignant and touching at times, and was a very good follow up movie to the original one. I also think that this might be a good place to end the franchise, and I hope that Disney and PIXAR won’t spoil it by adding a “Cars 4”.

In this movie, Lightning McQueen, now a seven-time Piston Cup champion, inevitably ends up discovering that he and his peers are quickly becoming overshadowed by a bunch of next generation race cars, who have superior technology and fancier training equipment than them. As McQueen’s peers start to head towards retirement, and after an accident happens to him, McQueen is forced to do some soul searching as he tries to get his game back.

Yes, this is your typical sports movie about an aging sportsman wondering whether he should still continue or move on, but aside from this, this movie tackles the heavy subject of discerning what to do next when you’ve reached a certain point in your life and career. And because of this, the ending, although predictable, is poignant and touching, and is the reason why I think that this movie is the perfect way to end the “Cars” film franchise.

Aside from all the original characters from the first movie, this movie also features Armie Hammer as the arrogant next generation Jackson Storm, Cristela Alonzo as McQueen’s trainer Cruz Ramirez, Nathan Fillion as the billionaire Sterling, and Chris Cooper as Doc Hudson’s (Paul Newman’s) mentor Smokey.

Among all of these characters, I loved Alonzo’s Cruz Ramirez, as she was a push in the right direction for a new character in this particular film franchise.

I also liked how grounded Sally Carrera’s (Bonnie Hunt) relationship with McQueen was, which, honestly, shouldn’t really have been such a surprise as they’ve been together for a long time now. I loved the fact that there was no relationship drama needed, and that she showed her support for him by being his support, by giving him enough space when he needed it, and by pushing him in the right direction while letting him learn his own lessons by himself.

In the end, I really enjoyed this movie. Some might complain about the first half of the film, but definitely stick around for the second half of this movie, as it became enjoyable, poignant, and had a depth to it which surprised me a lot.

Alright, you know the drill. Beyond this point, there will be spoilers!

One of the best things that “Cars 3” did was to really push Mater into the background. He was still very much present, as he is McQueen’s best friend, but the focus was not on him, like it did in “Cars 2”.

Another thing is that they really stuck to the general theme of car racing instead of it being a sports and espionage movie in one, which was, I think, was that movie’s undoing.

As I mentioned earlier, the movie itself and its conclusion was predictable, but honestly, I wouldn’t have it any other way.

During the course of the movie, it was fairly obvious that McQueen would end up choosing to be the crew chief and mentor of whoever ends up as his protege, just as Doc Hudson did for him. In fact, Doc also got into in accident during a race when new and faster rookie race cars showed up on the scene, just like what was happening to McQueen at the moment. It was the next logical step for McQueen to take, and I admittedly began to worry that he wouldn’t do just that when he did the first half of the race. This is why I was genuinely happy when he let Cruz take his number and became her crew chief for the rest of the race. I also liked the fact that in the end, Dinoco, who wanted to sponsor McQueen ever since the first movie, managed to by Rust-eze so that McQueen could be Cruz’s crew chief under the new merged company. I also love the fact that McQueen’s paint job was in homage to Doc, and the fact that the movie emphasizes that while technology really does help amp up your game, knowing your roots and using old school tactics is also a good thing.

I also liked Cruz’s character a lot. I thought that Alonzo was both refreshing and funny in this movie. It was also very interesting that even though she is a trainer and that she motivates others, she needs someone like McQueen to push her in the right direction for her to shine and to motivate her as well.

I love how the overall theme of the movie was about change in different stages in one’s life, and how people react to it.

Some people embrace it and move on to the next thing while keeping their legacy intact, while others have to crash and burn first before doing a little soul searching to see what they are truly made of, which, in turn helps them make a decision as to where their future may lie.

I also found it interesting that there was a lot of talk about keeping legacies and brands intact, and if we translate it to a more meta context, this is why I want “Cars 3” to be the last movie in the franchise. Keep the “Cars” franchise as “Cars” and “Cars 3”, and leave it at that.

In the end, I really enjoyed the movie, and was unexpectedly more emotional, poignant, and had a depth that I was not expecting at all from a “Cars” movie. So, if you did like the first installment of this franchise, I highly suggest that you watch this one.

Just a little update on what’s going to happening next. I’m going to be continuing my “Spiderman” movie reviews next week, which will be followed by a review of the pilot of the rebooted “Ducktales”. I might review “Dunkirk” as well, if I manage to catch it, and of course, when Disney XD’s new “Spiderman” show comes out, I’ll be reviewing the pilot of that as well. I might end up reviewing whatever movies I manage to catch in this year’s Cinemalaya festival (Filipino Art Film Festival), and then I’ll finally go back to the regular scheduled program of Classic Who reviews.