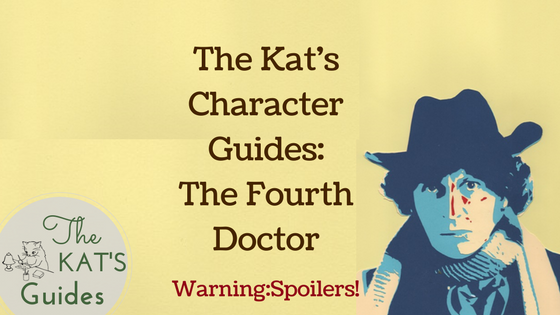 At this point, we have gone through all of the Fourth Doctor’s (Tom Baker) seven seasons, and we have looked at most of his companions. So, in order to officially bid his era goodbye, let us talk about the iconic man himself, and how he also evolved and changed as the show changed hands three times.

The Fourth Doctor, who was portrayed by the legendary Tom Baker for seven seasons, is not just any old incarnation of the Doctor, but is the Doctor that most people think of (aside from the David Tennant’s Tenth Doctor), when they mention “Doctor Who”. This isn’t surprising as Baker stayed in the role for seven whole seasons, had memorable companions; an iconic look (that coat and multi-colored scarf); and a great catchphrase (“Would you like a jelly baby?”).

His long tenure also saw three show runners in Philip Hinchcliffe, Graham Williams and John Nathan-Turner; and had iconic classic Who episodes such as “Genesis of the Daleks”, “City of Death”, “The Invasion of Time”, “The Hand of Fear”, “The Talons of Weng-Chiang”, and the unfinished serial “Shada”, just to name a few. However, each show runner made a definite mark on the show, and the Fourth Doctor’s era can be broken up by era.

Each particular era had different tones from each other. Hinchcliffe’s era was one of gothic horror, Williams’ era had a lot of humor and debuted the idea of having a season long arc, and the Nathan-Turner or JNT era was more hard science fiction.

The Fourth Doctor was more of an ancient intergalactic wanderer and truly relished the fact that he could now wander off wherever and whenever he wanted to, even though there were times in which the Time Lords called him back to Gallifrey or made him do something for them. He was unpredictable, quirky, excitable, full of wonder, full of surprise about himself,  witty, sometimes an action hero when the occasion arose, could talk his way out of almost every impossible situation he got himself into, and could be terrifying when angry (his deep booming voice, of course, has something to do with that.) Also, more often than not, he plays the fool so that he can enact a plan without his enemies knowing.

His relationships with his companions varied, but when it came to his enemies, he always tried to give them a second chance, or show them mercy before schooling them and making sure that their plans misfire on them.

The Fourth Doctor, as a character did change as the seasons and show runners went by. At first he was young yet wise and unpredictable; which soon gave way to a more self-assured Doctor; which then gave rise to a Doctor who was still everything that he was before, but with a splash of arrogance in the mix; and finally, to a Doctor who was actually wearing a little bit thin.

Baker’s performance was almost always perfect and brilliant, and he sold his villains very well, which, I believe was pretty hard to do in an era with no CGI and Green Screens to make your special effects happen.

However, as an actor, it is pretty known that Baker was difficult to work with, especially as the Doctor and the show became more and more popular. He has since then apologized for his behavior, but interestingly enough, this rarely affected the level of quality he gave in each and every episode he was in.

The Fourth Doctor is definitely one of the most definitive Doctor’s in the history of “Doctor Who”, and it is not surprising to see why.

Now, you know the drill, beyond this point, there will be spoilers!

In looking at the Fourth Doctor, I thought that the best way to discuss him would be to go through each distinct era and the companions that he had along the way, and how he evolved throughout the years.

The Hinchcliffe era didn’t really truly start until Season 13, as outgoing show runner Barry Letts was still supervising things while Hinchcliffe settled in, but it still gave us a clue of what this Doctor might be. Here, the Doctor was young, full of excitement and wanderlust, and he had no objections with having two people on board with him on the TARDIS. He liked having Sarah Jane and Harry along for the ride, and they actually did compliment each other quite well, even though, naturally, Sarah Jane was closer to the Doctor than Harry.

Season 13 and 14 saw a more self-assured Doctor, who was often pleasantly surprised at himself when his plans actually worked.

He spent a season and a few episodes more with Sarah Jane, and likewise with Leela, who came after her.

The Fourth Doctor and Sarah Jane were the best of friends, which was seen in the way they would tease each other. His relationship with Leela, however, was much different, as he was the Professor Higgins to her Eliza Doolittle. However, with both, he did value and appreciate the skills that they brought to the table- Sarah Jane’s journalistic skills sometimes came in handy, and it allowed her to not be afraid as much when confronting hostile aliens; while Leela’s hunting and fighting skills made her an excellent bodyguard to her new professor.

The Williams era was most definitely defined by its sense of humor, wit, Douglas Adams, the Time Lady Romana, and the robot dog K-9. It was also in this era which introduced the concept of a season long arc.

In this era, Baker and the Fourth Doctor were truly at the height of their powers, especially when enabled by Adams, who became the script editor for the show.

The Doctor’s attitude towards K-9 changed throughout the seasons, and in the end, grew fond and relied on the robot dog a lot, even though they had really fun bouts of verbal sparring with each other.

The brilliance that Baker had with Adams on board, at this point, hadn’t faltered yet, and the Fourth Doctor was still at the height of his powers, while being a tad less arrogant as he was in the previous season.

The JNT era, however, marked a big change in the show and for the Doctor himself, as they turned away from the “college humor” of the previous seasons, and had more stories rooted in hard science fiction. Aside from this, Season 18 had an overwhelming sense of doom and gloom about it, especially as the end of the season meant that the Fourth Doctor would finally depart the show.

Here, it seemed like the Doctor had gotten a lot more older, to the point that it felt that he had worn himself thin. There were also fewer moments for him to improvise, especially as JNT, in a way, knew how to rein Baker in.

Here, Romana and K-9 finally left the TARDIS, and he found himself with a rather crowded TARDIS what with Adric, Tegan and Nyssa suddenly coming along for the ride.

With these three, the Doctor felt more like a father figure trying to rein in his children, something that would definitely carry on to the Fifth Doctor (Peter Davison).

However, I know that I will always look back with fondness on this particular Doctor, especially due to his off-beat sense of humor and that toothy grin he gives when he’s happy or when he’s surprised that his plan actually worked.

Interestingly enough, even though I’ve seen the clip in which the Fourth Doctor regenerates into the Fifth Doctor, I didn’t think that I would get as teary eyed as I did when I finally saw it, especially because aside from seeing all of his greatest foes, he saw all of his previous companions.

Some of my favorite episodes with the Fourth Doctor include “Genesis of the Daleks”, “The Brain of Morbius”, “The Talons of Weng-Chiang”, “The Horror of Fang Rock”, “The Ribos Operation”,  and the “City of Death”.

Among all of the eras of the show, I have a particular fondness for the Hinchcliffe era, which was dominated by a gothic horror tone.

My least favorite was the JNT era, as I didn’t like the costume change, and it took a while to get used to all that 80s synth music that they used during Season 18.

The Fourth Doctor and Tom Baker will not just be remembered in “Doctor Who” history as a great Doctor, but will be remembered as the definitive version of what and who the Doctor is- an eccentric alien with a habit of picking up strays, who somehow ends up helping save the universe, one day at a time.