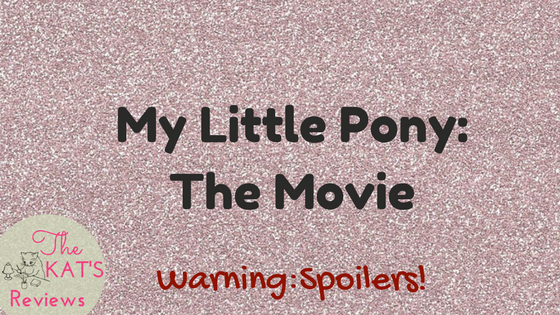 Ever since I became a fan of “My Little Pony: Friendship Is Magic” (yes, I am a very proud pegasister) I have been eagerly waiting for this movie to come out, especially as this is the first time that our favorite characters from the show will be in a full length feature film shown in cinemas. I am pretty sure that most of the fandom were both nervous and excited about it because making a movie this big is a huge risk for Hasbro as well. Despite all of that, and after watching the movie, I think that this is one film that both kids and the fandom will immensely enjoy.

To be honest, before entering the cinema with my sister who also loves the show, we decided to manage our expectations first. All we wanted was to be able to watch a fun, enjoyable movie, and that’s exactly what we got. In fact, I can actually say that I loved this film more than I liked the “Power Rangers” movie, and  that I thought it was just as good as the first “Equestria Girls” movie (which I really enjoyed a lot).

(Oh, before I go even further, I’d just like to say that I do have future plans to review “My Little Pony: Friendship Is Magic” and do a rewatch of the seasons that have come out so far, and including the whole “Equestria Girls” franchise as well.)

The movie starts off with Princess Twilight Sparkle (Tara Strong) and her friends preparing for the very first Friendship Festival in the magical land of Equestria. However, in the midst of their preparations, Commander Tempest Shadow (Emily Blunt), a unicorn with a broken horn, and the commander of the forces of the Storm King (Liev Schrieber) arrives with the intent of capturing all four alicorn princesses to in order to power up the Storm King’s magical staff. In order to save all of Equestria from Tempest Shadow and the Storm King’s forces, Twilight Sparkle and her friends embarked on an epic quest to ask for help, and learn valuable lessons about friendship along the way.

One thing that I really did appreciate is the fact that this movie can be treated as a stand-alone story.  However, if you are a fan and if you are wondering where this movie might sit in the continuity of the franchise, according to a tweet by the Supervising Director of the show, the movie takes place in between Seasons 7 and 8. (And yes, we will be having a Season 8 in Spring 2018!)

It did have humor that catered to both fans and non-fans alike, but it was also full of gags and character cameos that will definitely delight the fans.

It was also really interesting on how they were also able to use this movie to do more world building, especially as the current season is also expanding both the world and its lore on the show.

The animation in the film, however, is breathtaking, and is the one main factor that you should definitely watch this movie in cinemas.

The backgrounds were more in depth, the colors were so vivid, the character designs were great, and the way that the characters moved were so fluid.

I feel that the ponies were also drawn a little bit more proportionately and I did love how they added extra sparkles to their eyes.

Also, it’s been quite some time since I’ve seen a 2D animated movie on screen that wasn’t a Disney film, so this was an interesting breath of fresh air, in a manner of speaking.

Resident pony composer Daniel Ingram did a great job on both the music and the songs, and I think that these are his best yet.

Regarding the story and the pacing, yes, it did go through some familiar motions with the story and with the character motivations that went into the villains. However,  this still did not detract from the over all enjoyment that I had with this movie.

There were some interesting casting choices that were all on point, but it didn’t really affect the story or how well the movie was received.

All in all, if you are a fan of the  show, definitely check this movie out in your local cinema, as it was everything that fan would want to see in a big screen movie about our favorite ponies. However, if you are a parent or friend who isn’t necessarily a fan of the show, I think that there is some humor, characters, and breathtaking animation that will show you a good time, but I think it won’t leave as much as an impression as it did on the fans.

Alright, you know the drill! Beyond this point, there will be spoilers!

First off, how many character cameos did you fans notice in this movie? My sister and I had a field day in the opening scenes in Canterlot, and the kids in the cinema with us certainly had just as much fun as we did, especially when they enthusiastically pointed out Derpy Hooves.

In the show, I always love seeing the Wonderbolts do their thing, but its even more impressive on the big screen.

I thought that the big name casting choices were okay, but it really wouldn’t have made much of a difference even if they weren’t big names.

I also mentioned earlier that the humor and the gags were on point, and they were on point when it came to the main characters, from Rarity (Tabith St. Germain) checking herself out in a mirror while falling and her looking the most haggard in their journey throughout the badlands; to Fluttershy (Andrea Libman) counselling one of the Storm King’s men during the epic big battle towards the end of the film; to everything Pinkie Pie (Andrea Libman), because it’s Pinkie Pie.

It’s extremely difficult to really find the right balance for all of the Mane 6 to shine, and while you have these three at the forefront, with Rarity and her histrionics, Applejack (Ashleigh Ball) and Fluttershy ended up being the least prominent, although their presence was definitely felt.

However, in the end, this movie was really more of a Twilight Sparkle movie, because in the end, it is her and Tempest Shadow who end up learning valuable lessons about friendship.

I think many might say that Twilight behaved quite out of character in the latter part of the movie, when she manipulated her friends to show Princess Skystar (Kristen Chenoweth) a good time so that she could steal their magical pearl while they were all distracted, but I honestly don’t think it was THAT out of character.

Speaking as someone who is very much like Twilight, I believe that she made this choice out of desperation as Equestria’s situation was really…well…desperate. And, she felt that she alone should make the “tough call” on what to do as she is the only princess left, and because she felt that she couldn’t trust them enough because at certain points they did make some mistakes that could have been avoided if they listened to her. Sure, Twilight has matured as a character in the series, but just like anyone else, when you are at your lowest and most desperate point, you tend to do things that you regret. In fact, she realizes this when she says that she failed friendship, and not the other way around.

Interestingly enough, the one who got hurt the most out of all the five was Pinkie Pie, which makes sense, as Pinkie only wants to spread laughter and cheer and felt bad about the fact that her special talent was used in the wrong way. Also, as usual, Applejack was the first one to cool down and suggest they talk to Twilight after separating from her to cool off for a while.

I’m glad though, that the movie still kept the main personalities of the Mane 6 intact, and it genuinely seemed like a natural extension of the series.

I believe that the main villain of the movie wasn’t the Storm King, but Tempest Shadow. In the beginning, she was an interesting character, and her backstory was pretty interesting, but her character’s motivations into becoming a villain is something that we have seen before in the series, and executed better as well.

And once again, with Tempest Shadow or Fizzlepop Berrytwist (her real name), all she really needed was to be shown that even though she is different, with her broken horn, she still can be accepted by everypony. This, of course, is something we have seen time and time again in the series and even in “Equestria Girls”.

The story isn’t that complex and the movie has some pacing issues, but not up to the point that you won’t be able to enjoy the movie.

As I mentioned earlier, I think that making this a stand alone story was a wise move by Hasbro, and although it would be interesting to see if they can make this better on a second try, I don’t think that a sequel is truly needed for the movie.

Again, with regards to the timeline with the show, as mentioned earlier, this takes place in between Seasons 7 and 8. This still makes me wonder where Starlight Glimmer was, as I only saw her in the credits, but I guess she might have been off somewhere, maybe with Sunburst. I guess we will just have to wait and see.

However, I believe that it was a good move to not have Starlight or Discord (who made a cameo balloon appearance), because things would have been a little bit easier with these two around, and then it wouldn’t be much of a challenge for Twlight and her friends.

Some of my favorite scenes in the film include Rarity looking the most haggard while going through the badlands; the Rainbow Dash and pirates song about being awesome; the first time we see the Wonderbolts do what the do in the opening scenes of the movie; their transformation into sea ponies; the reveal that the sea ponies were the hippogriffs; that Pinkie Pie canon rescue; that daring escape to the airship; and Twilight making a makeshift hot air balloon in midair while escaping from said airship.

All in all, “My Little Pony: The Movie” was an enjoyable movie, with a lot of heart, great animation and songs, even though there were some issues with character motivations and pacing. If you are a fan of the show, by all means, go to your local cinema and watch this movie where it deserves to be seen, on the big screen.