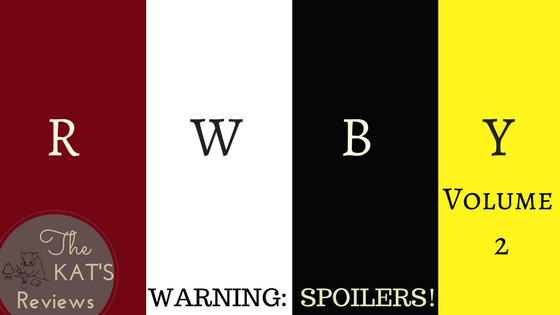 “RWBY’s” first volume definitely showed how promising the show could be despite a few hiccups when it came to its animation. Aside from that, the world and characters that Monty Oum created for Rooster Teeth was one that had a rich lore, which was often inspired by Western legends and fairytales. It introduced viewers to the world of Remnant, to Teams RWBY and JNPR, but left us wondering as to what will happen next. Volume 2 or the second season of the show, wastes no time in getting back to school antics, and begins to tease us as to the brewing storm bubbling beneath the surface of the preparations leading into the Vytal Festival.

The second volume or season, for the most part, still has a light hearted feel and tone to it, but doubles down on its action sequences and more emotional beats for the main characters. The latter half, or rather, episodes 9 to 12 has a significant and more sombre tone than the rest of the second volume, which is appropriate due to the events that happen during those episodes, and greatly hints at even bigger threats to come.

The three new villains that were shown at the end of Volume 1 have much more of a presence here as compared to the charismatic Roman Torchwick (Gray Haddock), but they leave just as much of an impact as he does. Aside from them, another ally of Torchwick’s, the fan favorite Neopolitan or Neo was also introduced.

This time around, there was more plot as compared to the first volume. Aside from that, it also began to show more of the underlying underpinnings of what really is going on as they started teasing us with the bigger picture by allowing the audience to be privvy to the conversations that Professor Ozpin (Shannon McCormick) has with his inner circle.

In terms of characterization, there is a lot of character development and revelations that come out for almost all of the characters. Many argue that Ruby Rose (Lindsay Jones) didn’t have that much development for this volume, but I think that at that point, since we have only seen them for a semester of their fictional lives, that Ruby was slowly but surely becoming a little bit better at talking to others and becoming a better leader. Ruby was always meant to be that “pure soul” whose desire to become a Huntress is the least complicated as compared to her teammates. However, I do love the dynamic that Team RWBY does have now.

Jaune Arc (Miles Luna) and Pyrrha Nikos (Jen Brown) also have some great development as characters in this volume, and in particular, the episodes leading up to the school dance.

The action sequences are even more on point, and the animation is better as compared to the first volume.

Alright, you know the drill! There will be spoilers beyond this point!

Volume I started at the beginning of the semester, while Volume 2 opens on the first day of school for the second semester, right before classes resume. This means that it had only been a matter of weeks, or even maybe a month, since the events in Volume 1.

This volume sees Team RWBY making new friends, attending a school dance, and continuing to investigate the events that transpired in Volume 1, and in particular, the Dust robberies conducted by Roman Torchwick.

During their investigation, they discover that Torchwick and the White Fang have a secret hideout somewhere in the southeast portion of Vale, and that they have stolen an armored Paladin that had been developed by the Kingdom of Atlas.

In the latter half of the volume, the girls go on their first mission, while shadowing Doctor Bartholomew Oobleck  (Joel Heyman), learn more about themselves, and find themselves having to stop Torchwick and the White Fang from transporting the stolen Paladins out of their secret hide out.

Meanwhile, the three new villains that were hinted at the end of Volume 1 infiltrate the Vytal Festival by pretending to be students from Haven Academy from the Kingdom of Mistral. These are Cinder Fall (Jennifer Nigri), Emerald Sustrai (Katie Newville), and Mercury Black (JJ Castillo)

This volume was also chock full of revelations such as Penny Polendina’s (Taylor McNee) true identity, and Yang Xiao Long’s (Barbara Dunkelman) back story. Aside from this, there was an interesting point in which we were also able to explore the motivations as to why Blake Belladonna (Arryn Zech), Yang, and Weiss Schnee (Kara Eberle) wanted to become Huntresses.

We first met Penny in the first volume towards the end, and I was greatly impressed with her fighting ability. Here, it was revealed that she is, in fact, the world’s first ever synthetic human to ever have an Aura of her own. She ends up revealing this to Ruby Rose (Lindsay Jones), who does promise to keep this a secret. Here, Penny is inspired by Pinocchio, and instead of her nose growing when she lies, she hiccups.

There was a lovely moment between Blake and Yang, as Yang tried to get Blake to slow down and not let her obsession over the White Fang take control of her life, as Blake had been eating, sleeping and resting less because of it. It is here that we discover that Yang had tried to search for her birth mother, who had left her when she was a baby, and because of that obsession, it almost led to her and her half sister, Ruby, getting killed by Grimm.

I also liked the fact that during their mission with Oobleck, he forced the three girls to think about why they wanted to become Huntresses in the first place. For Weiss, she felt that she could right her family company’s wrongs and uphold her family name by becoming one; Yang just wants a life full of adventure; while Blake wanted to be able to fight corruption by becoming one. In the end, however, it is interesting that even though they know they are on the right path, they are also discovering and exploring what drives them to become Huntresses. Oobleck didn’t ask Ruby because among all of the characters, this “pure soul” who just wants to do good and help others is the least complicated one of them all.

I also loved that we had more moments with Team JNPR, and you start seeing how much Pyrrha Nikos (Jen Brown) thinks of her fame as a curse, and how much she really does love Jaune Arc (Miles Luna), even though he still is head over heels over Weiss at this point in time. However, I do love how he came through and actually wore a dress in the end to the dance because of his bet with Pyrrha. This incident allowed the two to be closer than they were before.

It was also confirmed here that Nora and Ren are not a couple.

The dynamic of Team RWBY is wonderful when they work together, and they work seamlessly together now. I love how their combination attacks are named after their respective shipping names. However, that fight with the Atlesian Paladin with Torchwick inside was nothing short of amazing, plus Neo was introduced as well during that fight sequence.

Aside from that fight sequence, there’s also that epic food fight that happened in the first episode, with Team RWBY totally creaming Team JNPR.

Many have gotten annoyed at how this volume ended, especially as the massive Grimm attack was stopped not only by Team RWBY, but by other teams and the Atlesian military as well. However, I think that this is more realistic as I don’t think that Team RWBY and Doctor Oobleck could have taken all of that on their own, especially after coming out of several pretty exhausting battles beforehand.

Speaking of battles beforehand, my favorite episode for this volume would have to be “No Brakes”, due to the action sequences, and the appearance of a mystery woman who saved Yang, and who scared Neo to bits. My gut tells me that this is Yang’s missing mother.

With regards to character development, I feel like we were able to get into Yang, Blake, Weiss, Pyrrha, Jaune, Nora and Ren more; while Ruby is still slowly developing and maturing as a character. Her character progress may be non-existent here, but I feel that she is mellowing out, and has become a better leader than before.

The animation here is also better than the first volume’s animation.

In the end, Volume 2 ends on a high note, with the audience wanting to know more about the mystery woman who saved Yang, Cinder’s future (evil) plans, Ozpin’s inner circle,  and of course, the promise of an exciting Vytal Festival Tournament.

Volume 2 was definitely one step better than Volume I, and hopefully, Volume III will get even better.

What did you think of “RWBY” Volume 2? What were your favorite and least favorite moments of the volume? Let me know what you think in the comments below!