Cosplay is something that I have been trying to currently ease myself into, although it has taken me a long time to really go full out on it. Aside from the fact that I still get a little bit shy at first about it, there is also the fact that I’m not the best when it comes to arts and crafts. However, despite with, and the appropriate amount of lead time, I am hoping that all of this is something that I can conquer and challenge myself with.  After all, it never hurts to try, and doing this has been a dream of mine. Last year, I had a lot of help in making my DIY Halloween costume, and this year around, I decided that I would try my best not to ask as much as I did last year, and start experimenting with a cosplay that I wanted to work on for next year’s round of fan conventions- Twilight Sparkle from “”My Little Pony: Friendship is Magic” (MLP:FIM).

I have been very vocal here on  how much I love MLP. It’s because even though it is a kid’s show, it doles out life lessons that apply to both adults and children, and the way they present these and deep, complex issues are creative and astounding. (I’m talking about episodes such as “Bridle Gossip”, “Tanks for the Memories”, “The Cutie Map Parts I and II”, among others). The animation is pretty smooth, and I love how the show is so pure, and a ray of sunshine, especially when almost everything with everything going on today.  Also, all of the main characters, and even the secondary ones, are easy to relate to. I’ll talk more about this in the future, as I have decided that now would be a good time to start putting up my reviews for the seasons of MLP that have aired so far.

However, among the “Mane 6” characters, the one I most relate to is Twilight Sparkle. At first, this pony was socially awkward and needed an extra push to make friends as she was too caught up in her studies, which reminds me of myself. Add the fact that she loves checklists, researches a lot, and is such a worrier that she does have epic freak outs especially when she can’t control things, and you have me.

So, it is no wonder that I chose to go as her for this year’s Halloween, and is a character that I wanted to cosplay as.

This is how I came up with it.

(Of course, I sort of “Twilighted” the entire thing by overplanning, making sure I had enough material for mistakes to be made, and attempted doing some things in two mediums before settling on what to do.)

I got a vector template off of Deviant Art. I cut out one star and the pink star in the middle and laid it out on my tie to see where I should position them.

I then laid them out and used fabric glue to stick them to the tie.

Put the wig on a stand. (I made a very easy DIY one out of a bottle, scratch paper and a garbage bag).

I then removed the hair extensions from the clip so that I only had the hair weft. I then sewed it on in the appropriate areas. You can put her purple and pink streaks anywhere but I decided to put it on the right side.

I also had to trim the bangs to make it look straight for this wig.

I used this tutorial for the ears.

I also used a purple pentel pen to outline the ears.

I used this tutorial for the horn.

For the snap clip for this one, it’s better to use a bigger one so that it can hold better. I also made all my outlines using a purple pentel pen.

Clip them to your wig to see how it will look like.

Here’s the end result on the wig: 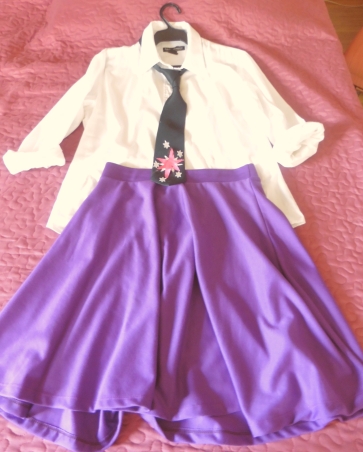 I finished off the look with red-purple glittery eyeshadow, pink lipstick, and the usual make up I put on when there’s a party (eyeliner, mascara, eyebrow pencil, blush on,foundation and concealer)

And there you have it, my Twilight Sparkle outfit for Halloween 2017!

I hope that this guide will also help others who are trying to make their own DIY My Little Pony costumes for any occasion.

(P.S. I’ll probably be making a Princess Twilight Sparkle version, and maybe a Pinkie Pie one in the future.)