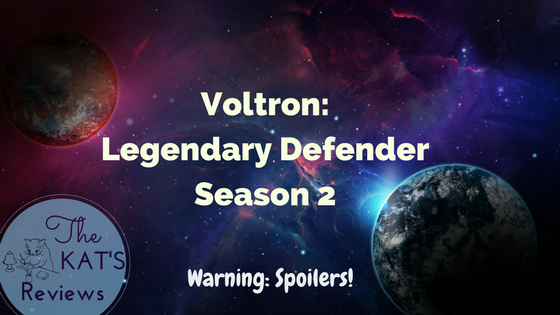 It has been quite some time since I watched the first season of “Voltron: Legendary Defender”, but I did promise myself that I would get around to continuing to watch it before the year ends. As someone who had limited knowledge on mecha anime and Voltron itself, I was surprised at how impressed and how engrossed I was with the entire story and its characters right from the get go. Thankfully, Season 2 ups its game by allowing us to explore the show’s universe more, and getting more story and backstory along the way.

The second season picks up where the show left off in the first season, and sees the paladins, Princess Allura (Kimberly Brooks), and Coran (Rhys Darby) gaining more allies as they help others on Galra occupied planets Interestingly enough, this greatly reminded me of how the Rebellion began in the “Star Wars” universe.

With the paladins helping out those in need, viewers are given the chance to roam and explore the galaxy more, as the story didn’t really give room for the paladins to explore as they were still getting used to being a team, forming Voltron and going against Emperor Zarkon (Neil Kaplan) himself.

During these missions, the paladins were also able to discover and unlock some new capabilities that their lions have.

The second season also gave us a lot of backstory and exposition on why Zarkon wants Voltron so much, and it also focused a lot more on Keith (Steven Yeun), Shiro (Josh Keaton) and Allura, giving them more character depth.

I like the fact that this season was more character driven, as they were given the time to do so. I also love how they are able to balance great action sequences, humor, and an interesting plot, all in one animated show.

One thing that I really did appreciate about this season was that they paced things well. I like the fact that during some moments, in certain missions, they were able to devote one episode per team. This happened twice in this season. They did this in the season premiere when the paladins were forced apart and drifted off in that broken wormhole; and secondly, when they went off to accomplish their separate tasks before the big fight against Zarkon and the Galra Empire at the tail end of the season. This allows us to spend more time with the specific characters in the episode, and gives them a little bit more character depth than before.

Most of the second season had a pretty simple plot. The paladins start answering calls for help across the universe, they help liberate planets from Galra rule, and they start gaining allies whom they count on to help them out in their big battle at the end of the second season.

However, what is more interesting are the revelations that are brought to light during this season.

Here, we learn that Zarkon had been the former paladin of the Black Lion, and that he still has his bayard and a strong psychic connection to it. Shiro, therefore, had to bond with his lion more, and also had to battle Zarkon in the astral plane for control over the Black Lion, something that was no easy feat indeed. In the end, he was able to gain full control over the Black Lion, and was able to defeat Zarkon, for now, but Shiro himself ended up missing at the end of the second season. However, with him struggling from the last remnants his PTSD, and all these struggles he is up against, I think he knew that there would be a chance that something might happen to him, and tells Keith to step up and fill in his shoes if that happens, which it did. I also love the fact that the only thing that can rile Shiro up is Slav, a genius but highly neurotic engineer.

We are also introduced to the Blade of Marmora, a resistance group of Galrans who have been operating for quite some time. We also discover that Keith is half Galran, most probably on his maternal side, and that his Galran side has connections to the Blade of Marmora. This presents a lot of interesting dilemmas as Keith begins to worry that he might turn evil like most Galrans under Zarkons rule, and this revelation causes Allura to distance herself from him, due to her prejudice against Galrans for what they did. Now, with Shiro missing, I wonder how long it will take Keith to step up to become  the new leader of the group, if their group dynamic will change, and what struggles he might have to face during this period of time.

Allura’s prejudice against Galrans comes into full display here, especially as they have to work with the Blade of Marmora and after learning that Keith is half Galran. However, in the end, I’m glad that she was able to look beyond that, and was able to apologize to Keith for just ignoring him and distancing herself from him during this season. It was also interesting how Allura’s own raw magical powers were triggered during her fight with Hagg’ar, and who would have thought that Haggar (Cree Summer) was ALTEAN?!

I definitely loved seeing different sides to Coran, such as him going through different stages of his life during the season premiere. However, I do hope that he’ll get more character development as the seasons progress.

Pidge’s (Bex Taylor-Klaus) motivations are still the same, and she’s able to get one step closer as she found footage that her brother had been taken by pirates or freedom fighters after an attack on a Galran prison ship. This season also showed that she has gotten way better at doing what she does best when it comes to missions. She’s the hacker of the group, but she’s also the best when it comes to breaking and entering, especially into parts of the ship which are more heavily guarded. I also love how they showcased her ingenuity during this season, and it also showed that she still has a lot of growing up to do.

When Keith goes into an identity crisis, he gets sullen and irritable, but when Lance (Jeremy Shada) goes through the same thing, he really does need to talk things out. This season, Lance started to question his own place in the team, and what he brings to the table for the team. He proclaims himself as the team’s sharpshooter, but I think that he’s more of a jack-of-all-trades. Sure, he can’t hack or do anything tech related, but he’s very agile, resourceful, a swift thinker, and can improvise depending on the situation. He’s definitely a great asset as these skills actually DO allow him to survive, and allow him to do a number of things when it comes to battles.

I think that Hunk (Tyler Labine) got the least amount of character development in the second season, which is definitely a big shame, especially as the episodes that did focus on him during the first season were the most touching for me.

Aside from this, I thought that the animation, action sequences, the story,the pacing, and the music were all great. I also love the fact that they are able to tell a serialized, grand epic story, while finding enough time to try to have character development, while balancing it with well timed humor.

The second season definitely stepped up its game, and left us hanging with questions that can only be answered in the third season. However, since Netflix in my country doesn’t have the show, and I’m just relying on Amazon and/or Itunes, I’ll have to wait for the third and fourth seasons to come out there first before I review them. However, I do hope that you continue checking out this wonderful animated show, and I do hope to have some time to come back to it when I can finally watch it.

P.S. Also, if you have any suggestions on what mecha anime I should watch next, please let me know as well. I’m excited to see and delve into this genre of anime that I haven’t really explored before.