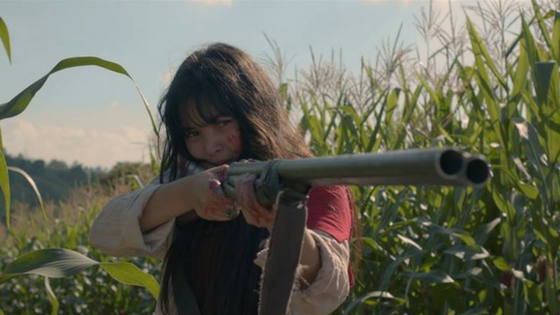 Recently, streaming giant Netflix has been quite aggressive in expanding their database by adding and acquiring Asian television shows and dramas. However, just a few days ago, Netflix made history once again by acquiring the critically acclaimed film “Birdshot”, making it the first Filipino piece of content to be added to the streaming giant’s huge media database, and their choice couldn’t have been more perfect. “Birdshot” is a true indie film in aesthetic, boasting beautiful cinematography and haunting performances that make it stand out, even among its more indie Filipino film brethren.

“Birdshot”, interestingly enough, was written with the premise of what would happen if you shot a Philippine eagle, the country’s national bird. In reality, there have been two such cases, and the penalty for shooting a Philippine eagle is pretty grave as you will be sentenced to twelve years in prison with additional hefty fines.

It starred newcomer Mary Joy Apostol as Maya; Arnold Reyes as Domingo;  John Arcilla as Mendoza; and Ku Aquino as Diego, Maya’s father. The film was directed Mikhail Red; written by Mikahail and Rae Red; with cinematography by Mycko David.

This film was an official entry to Pista ng Pelikulang Pinoy, the country’s entry to the most recent Academy Awards for Foreign Language Film; an entry in the 13th Cinemalaya Film Festival; was screened at the 2016 Tokyo International Film Festival; and has won several accolades.

The film follows a young farm girl named Maya (Mary Joy Apostol), who shoots a Philippine eagle in a nearby reserve; and Domingo (Arnold Reyes), a rookie policeman and new father who is obsessed with uncovering the truth about a missing bus of ten farmers headed for the city, but is reassigned to figure out who killed a Philippine eagle. These two cases and these individual’s lives are woven together to create a quiet and powerful film that is a coming of age story and a critique on violence and the corruption that happens even at the lowest levels.

Stories about corruption within the political arena and within law enforcement are rife in Philippine cinema, but “Birdshot” is a breath of fresh air as it is not set in the busy streets of Manila, and goes against the rule by setting this film in a beautiful and serene countryside.

The film itself has a disturbing quietness to it which drives home the point even harder that amidst such beauty and serenity, danger and violence lurk behind it as well. Aside from the aesthetic of the film, thanks to David’s gorgeous and lush cinematography; this is also shown with the underlying themes of predator and prey in the never ending violent cycle of life-especially as they chose the Philippine eagle, a predator, to be a big part of the film.

The performances of each cast member, from the main characters all the way to its secondary characters was phenomenal. However, the standout here was Mary Joy Apostol, who was able to portray the complex role of Maya so effortlessly and in such a realistic manner.

Also, trigger warning, this film also contains a lot of animal deaths, but it really isn’t shown on screen, and I am  pretty sure the crew took all the necessary precautions to ensure the safety of whatever animal they used in the film.

All in all, “Birdshot” is a quiet film that juxtaposes the beauty of life with the harsh reality or corruption and violence, and a film in which there are no happy endings or redemptive arcs for the characters. With gorgeous cinematography and powerful performances, “Birdshot” is a true indie film in the arena of World Cinema, and the perfect choice to be the first Filipino movie to be up on Netflix.

As mentioned earlier, one of the things that “Birdshot” got right was its gorgeous cinematography. As far as quality goes, this film’s cinematography truly stands out as its quality felt like it was done by a seasoned Hollywood cinematographer. It also helped dictate the tone of the film, with its still and beautiful shots of nature juxtaposed with the grittiness of the police station. Aside from this, it was interesting how majority of the film was a sea of green, with splashes of red that reminded us of the sheer and brutal nature of violence and corruption that lies beneath the surface.

It was also interesting how this never ending cycle of violence is also shown in the very last shot of the film, with Maya discovering the haphazardly buried dead farmers in the reserve while the remaining two Philippine eagles circle overhead, almost vulture-like.

It was also interesting to see how these two individuals, Maya and Domingo, reacted to the situations that were presented to them in the film;  and how they also paralleled each other with the themes of violence,  corruption, and the loss of innocence.

For Domingo, he went from idealistic cop who wanted to seek justice for these missing and innocent farmers, to quickly becoming a corrupt cop who was willing to do anything to get the job done for his superiors, after succumbing to paranoia as his wife and his baby were threatened. In most film’s, one would expect the idealistic young cop to triumph in the end by aggressively pursuing the truth no matter what the consequences. However, Domingo’s reaction was more realistic, because there is nothing he can do unless he wants his entire family, and himself, to be killed. Here, the harsh reality that your ideals can get you killed is presented, and Domingo succumbed to it as he figured that his entire family’s life wasn’t worth staying idealistic.

On the other hand, there is Maya, a sheltered farm girl whose father is teaching her to hunt in order to survive, who is entering into womanhood, and who is also curious about the world in the city. She does want to prove to her father that she is big enough to take care of herself, but in her father’s eyes, that means being able to shoot. So, her decision to shoot the Philippine eagle was pretty much deliberate murder. She knew that the sound she heard that attracted her to the reserve was one of the three eagles there, and it was a deliberate decision on her end that she pulled out that shotgun and decided to practice her shooting skills on that eagle. However, one thing that I still don’t understand is why her father never told her NOT to shoot a national symbol.

Maya’s father takes the most blows as a consequence of her actions, and because of this, Maya loses everything she loves. This is painful and jarring for her, accompanied with the fact that she has just experienced her first period. However, interestingly enough, Maya ends up reacting the opposite of Domingo. She retreats into the forest and nature, even though she is faced with harsh realities. Maya’s ending is very much open for interpretation, but I do believe that Maya ended up retreating into the forest, and probably lived off of nature just like her father taught her to do. It was also interesting that a figure dressed in red was always there, watching her, as if the spirits of the forest, or the spirits of the dead farmers, were watching over her  and protecting her.

Aside from Apostol’s brilliant performances, the rest of cast was amazing as well. Reyes’ slow descent into madness was mesmerizing; Arcilla’s bad guy persona was realistic; and the grizzled Aquino was able to take the punches meant for Maya. Even the chief of police, who only had a few minutes of screen time was convincing, with his looks of utter contempt at Reyes.

“Birdshot” is a slow burn, and definitely not a film for everyone. However, it did take a very different approach in tackling heavy themes and subjects that have tackled plenty of times in the realm of Philippine cinema. Because of this, and the way the film was executed, it is no wonder that this film deserves to be known, and the most perfect choice to be the Philippines’ first ever film to be on Netflix.

Have you seen “Birdshot”? What did you think of it? What other Filipino films or tv shows do you think should be added to Netflix’s database? Let me know what you think in the comments below!