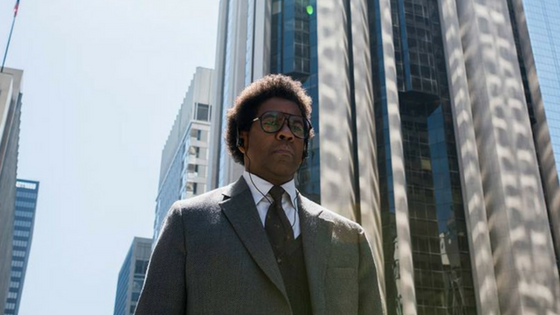 Over the years, the film industry, whether it be Hollywood or International Cinema, has changed and has become more progressive, even though it took some time for it do so. The movie industry, especially in Western cinema, has only become more inclusive and diverse as of late, and movements such as #MeToo and #TimesUp have sparked debates and have become agents of change not only in the film industry, but in other industries as well. So, since April is Autism Acceptance Month, I have decided to feature, (aside from my usual fare), films and other media that deal with autism, and will be doing this in tandem with my other blog, The Asian Aspergirl.

The first movie that I  chose to review for this particular blog series was one of Denzel Washington’s most recent outings, “Roman J. Israel, Esq.”.

The movie starred Denzel Washington as a lawyer with Asperger’s Syndrome named Roman J. Israel Esq.; Colin Farrell as George Pierce, a hotshot lawyer with his own firm; and Carmen Ejogo as Maya,  a local activist. It was written and directed by Dan Gilroy, with cinematography by Robert Elswit,  and with a score by James Newton Howard. It first premiered at the Toronto International Film Festival (TIFF) on September 10, 2017, and premiered with a limited release in the US on November 17, 2017. It can also be found digitally online.

It follows Roman J. Israel, Esq., a lawyer with Asperger’s Syndrome, whose entire world gets upended after his long time law firm partner, who handled all the public appearances of their firm, suffers a severe heart attack. Because of this, he is forced to engage with clients and co-workers alike after being hired by George Pierce, Israel’s partner’s protege, who runs his firm like a business, which clashes with Israel’s values. Aside from this, Israel has also been developing a huge brief that would help reform the plea bargaining system. The rest of the movie is a compelling character study about Israel, how he reacts to things and the decisions he makes, and how it affected both Pierce and Maya, a local activist Israel met.

His diagnosis wasn’t really mentioned outright, with Pierce mentioning that he believed that Israel was a savant, but it was pretty much seen in the way he behaved, talked and how he did things. As someone with Asperger’s, I thought that his portrayal was well done and that it was very organic, which meant that he did do his research well.

The cinematography had a very old school aesthetic which I liked, and which suited Israel’s character as well, as he seemed like a man stuck in a different time period, what with his afro, Ipod, old headphones, flip phone and vinyl records. Newton Howard’s score also followed suit, and the soundtrack also included several wonderful jazz songs that suited the main character to a tee.

Farrell gave a wonderful performance as Pierce; and Ejogo did what she could with the material she was given to work with, which, in her case, wasn’t that much.

As a movie, there are some plot holes in it, and it has no emotional satisfaction in the end. It’s like you can see the potential the movie has to offer but it doesn’t quite go there in the end. However, the entire experience does become more satisfying if you watch it as more of a character study, as, in essence, this is what the movie really is.

So, if you are a fan of Washington’s, or in need of a movie that is a great character study, or if you do want a movie that does autism and Asperger’s right, then this movie is for you. Just remember that narratively speaking, there are a lot of plot holes and it doesn’t pack the emotional punch you’d want it to have.

Now, you know the drill. From here on out, there will be spoilers!

As mentioned earlier, this movie is better viewed as a character study, as it has one of Washington’s best performances to date.

Here, Washington really proves that he did his homework, and organically disappears into his character to the point that you forget that he is playing a part. He achieved this by giving a lot of attention to detail on the different aspects that make up his character. His physicality changed, from the way he walked, all the way to little behaviors and tics, and the way he avoided eye contact as most of those on the spectrum do. The way he spoke also changed, and you could also see the way that he thought based on all of the above. The way he interacted with others in the movie was also well done, and the mini breakdown scenes and sensory overload scenes were also done well. As someone on the spectrum myself, I am always happy to see autism done right in movies, and I can safely say that this is one of those times as well.

I also like the fact that even though the main character does have Asperger’s, him being on the spectrum wasn’t the main focus of everything, rather it was just an aspect or part of his character. I also liked the fact that Pierce was understanding of him and adjusted, but also called him out when it was needed.

Aside from having a character on the spectrum, in interviews done with Washington and Gilroy, it was mentioned that a big part of the movie was that they wanted to try to revive the spirit of activism to their viewers. I think that they were able to get the point across in a way, and also showed what happens when loses sight of this due to the dire circumstances they are put in, as sometimes, retaining that spirit can be quite hard.

As a movie, however, this movie is one of those that falls short of its own potential. There are some loose plot points and moments, and the ending, although I admit that I smiled at it, was a little bit cheesy, and only packed a little bit of an emotional punch, instead of the big one that I was expecting from it.