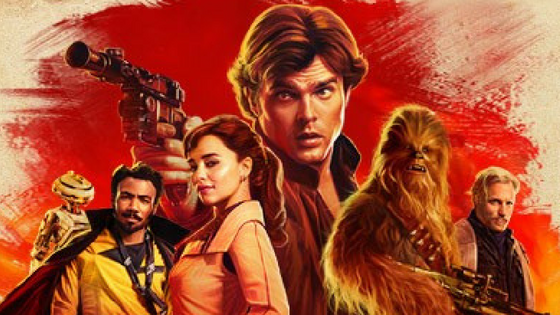 Having the main saga stories come out every other year is a smart move as it allows them to explore parts of the galaxy that hasn’t been touched upon before, while it gives us a nice little break from everything happening with the Skywalker clan. In 2016, we had “Rogue One”, which nicely filled in the gap between “Star Wars: Rebels” and led right into the events of “A New Hope”. This time around, Disney and Lucasfilm accepted the daunting challenge of tackling the origin story of the iconic character of Han Solo in “Solo: A Star Wars Story”. Thankfully, despite all the controversies and behind the scenes drama that happened, Alden Ehrenreich proved that he was up to the task; and while not a perfect movie, it was a fun space adventure romp when it was at its best, and a good palette cleanser to the heavier “Rogue One” and “The Last Jedi”.

“Solo: A Star Wars Story” was written by Lawrence and Jonathan Kasdan;  with characters created by George Lucas; and with music by John Powell, supplemented by John Williams’ Han Solo and some original “Star Wars” music. Ron Howard is credited as the director of the movie, but it is no secret that he came in later in the game and did a lot of reshoots after the original directors, Phil Lord and Chris Miller, were let go.

The movie is an origin story of sorts for Han Solo, who is portrayed here by Alden Ehrenreich, as it shows us some of the events that led to Han becoming the person he was at the beginning of the original “Star Wars” trilogy. Among other events, it shows us how Han acquired the Millenium Falcon, and how he first met Chewbacca (Joonas Suotamo), and everyone’s  favorite smooth talking smuggler, Lando Calrissian (Donald Glover).

While “Rogue One” nicely filled in the gap between “Rebels” and “A New Hope”, this movie doesn’t really tie in much to the political events in the galaxy, and allows us to delve a little bit more into the criminal underbelly of the galaxy, something that was shown a little bit in the “Clone Wars” episodes. There were also a lot of nice connections not only to “A New Hope” in this film with regards to Han and Chewbacca, but there was also a surprising amount of references the “Clone Wars” and “Rebels” series as well. The references didn’t seem too much, in my opinion, and die hard fans of the franchise and of Han and Chewbacca will definitely have a field day with it, and most especially in the end when a particular character that I wasn’t expecting at all to see suddenly pops up.

Ehrenreich did a good job in trying to fill in the shoes of Harrison Ford in portraying a younger version of his iconic character. There were moments in which he did fade a little bit into the background, and didn’t have as much presence as I wanted to at times, I thought that he pulled it off well and made me believe that he was a young Han. However, some of the best parts of the movie had to do with his interactions with Chewbacca. Their dynamic was great, and since the actor playing Chewie is younger, it allowed us to see a more dynamic and mobile Chewie who spared no expense  when it came to taking down their enemies.

Emilia Clarke surprised me here because this is the first time I’ve watched her and not think of her role as Daenerys Targaryan from”Game of Thrones”. Here chemistry with Ehrenreich was great, and it was believable that they had known each other for a long time and were lovers.

Glover was just flawless as Lando, and you can be forgiven if you thought that they somehow managed to de-age Billy Dee Williams for this role.

Direction wise, there were moments where the pacing was a little off, and moments which were a bit clunky, and emotional beats that really didn’t stick the landing. Aside from that, there was not much development when it came to Han’s character as a whole, but aside from that they were successful in giving us what they intended the movie to be- a fun space adventure with hints of it being a space western.

All in all, the movie was definitely a fun ride, with hints of fanservice that will delight fans of Han, Chewbacca, Lando and the franchise itself. And because of this, as mentioned earlier, it was definitely what we needed given that the last two “Star Wars” films were pretty heavy.

One of the difficult things when it comes to creating this movie is that they have to be able to try to give us a little bit more depth and perspective into Han’s character and his actions in the main saga films, while also trying to explain particular things that Han has previously talked about, without rocking the boat too much. I think that this one of the reasons why it became more of a space adventure romp instead of delving deeper into the psyche of Han’s character as a whole. I believe that this could have been delved into if there were particular beats that stuck the landing, but given the messy behind the scenes drama that happened with this movie, I’m just glad that it didn’t come out worse.

It definitely was a fun ride, but at the same time, it didn’t really have a great villain, and I thought that some things that were definitely rushed. I would have liked to amp up how much more  menacing Crimson Dawn was as compared to the other cartels and criminal syndicates  in a way that those who aren’t well versed in “Star Wars” lore could understand as well. I do appreciate how they tried to connect things to the beginning Rebellion movement with Enfyss Nest, but I felt like it was too rushed and sometimes felt like it was added at the last minute.

This lack of depth also caused the character development of Han to suffer, and did make it seem like it was just a bunch of events strung together. Here we got to see how Han met Chewie and their actual dynamic was like, how they ended up doing jobs for Jabba the Hutt, how they met Lando  and acquired the Falcon, and how Han did the Kessel Run (not exactly in 12 parsecs like he claimed, but it was fast enough), and how, yes, he always does shoot first.

Among all the other “Star Wars” films to date, this one was the one that referenced not only the events of the main saga, but it also made reference a lot to “The Clone Wars” and “Rebels”, even more than “Rogue One” did. Here, we had a nod towards Jabba the Hutt from the main saga; criminal syndicates from “The Clone Wars”; and Aurra Sing from “The Clone Wars”,  who was Boba Fett’s mentor. However, the biggest reference  that neatly tied it together with the movies and tv shows was none other than Darth Maul, who was voiced by the one and only Sam Witwer. I didn’t expect this character to appear as it’s been ages since he’s appeared in the live action movies, and since we already know his future fate thanks to “Rebels”. His presence also helps date when all of this happened.

As mentioned earlier, I thought that Ehrenreich did deliver as a young Han Solo. It is definitely not an easy task to fill in the shoes of such an iconic character and Ford’s great performance, but I do believe that he was able to pull it off, although at times his bravado would fade a bit. His dynamic with Lando, Chewbacca and Qi’ra (Emilia Clarke) were great and believable.

Again, Glover was just seamless; and it was the first time I saw Clarke pull off a different character that didn’t make me think of her role in “Game of Thrones”.

Chewbacca was just awesome as this is the first time in which we see Chewie more in the thick of everything and really, truly, fighting off others.

The Falcon was just as beautiful as ever, there is just something iconic and wonderful about seeing the younger versions of Han and Chewie in the cockpit, their hands on the levers to go to light speed, and with Han telling him to “punch it!”

Despite all the nitpicks I have about this movie, I had so much fun with this movie, and it made me feel rewarded as a fan of the franchise, as it was the first time that a live action movie had a lot of references from the original trilogy as well as the animated television shows. Aside from this, I thought that the actors were able to bring their best to the table, and Kasdans delivered on giving us a fun romp which oddly felt more like a “Star Wars” adventure as compared to the heavier installments as of late. While I am not exactly jumping for a sequel, I hope that they will also learn from these experiences and bring those in with the planned “Lando” and “Obi-Wan Kenobi” movies going forward. A definite must watch for any die hard “Star Wars” fan!