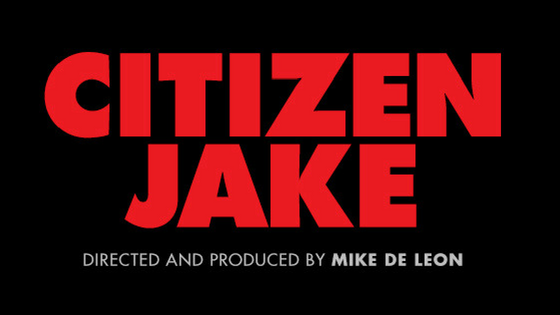 Over the past few years, the independent local film scene has been booming with well made, well acted, and meaningful films. It has come to the point in which movies like “Birdshot” have become available for streaming on Netflix, and to the point in which smaller local film fests are attended by more and more people every year, and there are film fests like Pista ng Pelikulang Pinoy (Fiesta of Filipino Films) which have tie ups with local cinema chains so that indie films would become more mainstream. With this and with the current political climate in the country, it is no wonder that veteran director Mike de Leon came out and created a very timely movie that will resonate with most Filipinos today, which also so happens to be his first film in eighteen years. “Citizen Jake” is definitely a must watch film as it is reflective of the times and haunts you, because the beauty about this film is that the titular character can honestly be any and every Filipino today.
Aside from the fact that this is Mike de Leon’s (“Kakabakaba Ka Ba?”, “Kisapmata”, “Batch ’81”, “Sister Stella L”, “Bayaning Third World”) first movie in eighteen years , the titular character of Jake Herrera is played by a local renowned journalist named Atom Araullo. This film marks Araullo’s acting debut.
“Citizen Jake” is a neo noir metacinema film revolving around the titular character, Jake Herrera. Jake is a jounalist turned blogger and teacher residing in Baguio City, who struggles to escape his family’s sordid history by trying to expose the wrongdoings of his father, a senator with deep ties to the administration of Ferdinand Marcos. Set right before the 2016 elections, as Jake continues his one man war against father and congressman older brother, he begins to investigate a murder which changes him forever and forces him to confront the harsh realities of his family and the state of politics and society today.
To be honest, my main draw to this film was Atom Araullo as I have heard more about him as I have not really delved deep yet into learning more about Filipino cinema. I initially wanted to catch the initial screening, but as I was not able to, I am glad that I was able to watch it before it was pulled out of the local cinema I usually frequent.
There were moments that I felt the pacing was uneven;  and the acting of Araullo and his love interest Mandy (Max Collins) was also uneven at times; but the cinematography was just gorgeous; the way it was framed as a story was interesting and creative; and the message hit home hard.
Although I say that Araullo was sometimes uneven in his acting, despite everything, as this was his first time acting, I thought that he did a fine job in convincing me that he was Jake Herrera in this film.
“Citizen Jake” will undoubtedly resonate with viewers as Jake is very much the middle class everyman Filipino of today. Despite his penchant for the melodramatic, almost all of us has experienced being frustrated at the current state of our country and the way it is being run by our current politicians. Some of us try to fight and speak up, but just like Jake, we end up discovering that it is pretty hard to change a system, especially one of the strongman rule, that has been in place and has been ingrained in our country’s DNA since way back when. This a film that doesn’t really invite us to incite change, but it does ask its viewers to take a good look and reflect upon oneself and how we respond to the political climate today. It doesn’t give us a solution, but asks us to take a good look in the mirror, and in this way, it is reflective not only of the Filipino people and in particular the middle class, but of Philippine society and politics today.
This film is a definite must watch, especially for Filipino millennials; and is a film that will go down in history as one that is a disturbing yet very real snapshot of the Philippines in this decade.
Now, you know the drill! From here on out, there will be spoilers!

The story of the film revolves around and is told by Jacobo Herrera, Jr., who goes as Jake Herrera in an attempt to escape the clutches of his senator father. He resides in the idyllic Baguio City, which has now become more of a city and a tourist attraction, in his mother’s house, alongside the caretakers of the house, including the caretaker’s son, who has become a good friend of Jake’s as well. As a journalist turned blogger and teacher, Jake is on a crusade to expose the wrongdoings of his father, which also enrages his older brother Roxie (Gabby Eigenmann), a bully and a congressman obsessed with winning his father’s favor and with “The Godfather” films.
Things changed for Jake after a college student, who was a student of Mandy’s (Max Collins), Jake’s girlfriend and long time friend, was found raped and murdered in a quaint cottage tucked inside the city. Urged on by Mandy, Jake  investigated the murder, and discovered that she works for Patti Medina (Cherie Gil), a former starlet who was a former lover of Marcos’, and who now runs an escort service for prominent businessmen and politicians. In the course of his investigation, he discovered several harsh truths- that his friend and confidante, the son of the house’s caretakers had been spying on him on his older brother’s orders; that social classes, no matter how hard you try, are too ingrained and is hard to transcend; that his mother who left them had long since passed away and had been writing to the caretakers asking about how he was; and the harsh truth that no matter what, all of his efforts in fighting the system were all in vain. The last one, he realized after discovering that the student had been raped and murdered on orders of his own father, as he needed the student’s lover, a judge, in his own pocket.
In the end, after Mandy broke up with him and his confidante killed by his brother, fed up with everything, Jake confronted his father hoping to shoot him dead. However, when the time came, Jake ended up shooting his father’s bodyguard instead.
Disillusioned and jaded, Jake returned back to Metro Manila, decided to live alone in a nice looking flat in a high rise overlooking the entire city, and confronts the audience telling reminding them that he decided to tell the truth in the form of fiction, because sometimes, fiction resonates stronger than the truth.
This movie hits hard because Jake is almost every middle class Filipino today. Yes, we are engaged in what’s happening around us, and we get enraged and most of us try our best to fight the system and enact change any way we can. We post rants on social media, post our cries of outrage with how everything is being handled and run, but in the end, just like Jake in the end, it gets frustrating because as much as we fight and cry out, it is hard to change a system that’s already ingrained in our DNA. So in the end, we end up detaching ourselves, and although we do voice our views, most of the time, we are just observers, because sometimes, there’s nothing else we can do but just keep on living one day at a time.
Another thing that resonated was how Jake tried to break down the social class barriers with his confidante, Jonie (Adrian Alandy). Although it is a good thing, and a lot of Filipinos in the middle class behave like this, there is, sadly, that harsh reality that at a certain point, there are some lines that just can’t be crossed.
Having the movie be framed as a work of fiction to tell the truth was an interesting concept, because in the end, works of fiction do catch our attention more than reality, and it allows us to observe objectively than when events unfold in front of us in real life.
Citizen Jake is a brilliant movie as this is a movie that will definitely be talked about, leave food for thought for the viewers, and will be relatable and understood by most because it isn’t a feel good story about the underdog triumphing over evil; but because it shows us who we all truly are when it comes to being citizens of this nation.
As mentioned earlier, I did feel that the story’s pace was uneven, but I did like how the story line of Jake’s father and the murder of the college student was tied together by Patti Medina’s (Cherie Gil) character.
Collins and Araullo failed to convince me that they were grounded characters and characters that have a lot of history with each other; but despite that, I still think that they did a good job.
Of course, the veteran cast was amazing, and Eigenmann impressed me with his acting in this film.
All in all, “Citizen Jake” stands out because this is not a feel good story of an underdog but a story that highlights the Filipino middle class and is a good reflection of that societal class today and the state of the country today.
Were you able to catch “Citizen Jake” in theaters? What did you think of it? Do you think that this film deserves to be picked up by Netflix, Hooq or Iflix so that more audiences, both local and international can experience it? Let me know what you think in the comments below!
Image Source: Citizen Jake Facebook Page