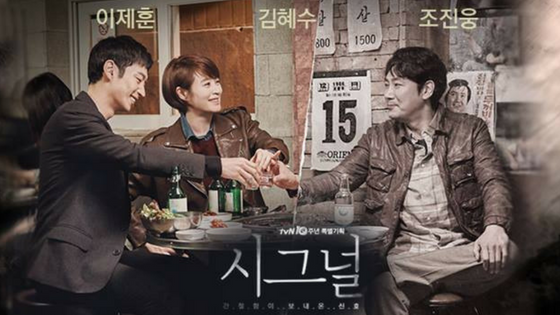 Every now and then, amidst the myriad of Korean dramas that crop up every year, there are a handful that are good solid dramas that are not only timeless, but a precursor of things to come and that mark a milestone in the evolution of Korean dramas. tvN’s “Forest of Secrets/Stranger” was definitely one of those kinds of dramas; and from 2016, alongside KBS’ “Descendants of the Sun” and tvN’s ratings hit “Goblin”, we had the mind boggling thriller that is “Signal”.

tvN’s “Signal” ran for sixteen episodes from January 22 to March 12, 2016. It was written by veteran mystery writer Kim Eun Hee and was directed by Kim Won Suk. Even though the show aired on a pay channel, which usually means lower ratings as compared to other channels, the series gained critical acclaim as it was well-made, well acted, and it drew attention as the cases that were showcased in the series were based on actual real cases. It became on of the highest rated dramas in the history of Korean cable television history so much so that there was a Japanese remake of the show which aired this year, and it seems like there will be a second season of the actual show due to its open ended ending.

“Signal” follows a young profiler in present day named Park Hae Young (Lee Je Hoon), who acquires a mysterious walkie-talkie that allows him to communicate with Detective Lee Jae Han (Jo Jin Woong) from the late ’80s to the early 2000s. Together, alongside Detective Cha Soo Hyun (Kim Hye Soo), Hae Young’s boss, and a close friend of Jae Han’s, the three attempt to solve several cold cases that hit closer to home more often than not, in order to change the future and bring those responsible for their crimes to justice.

“Signal” was a well-directed, well-crafted, well-written, and well-acted show. Every single detail, from the opening scene, all the way to the last few minutes of the series, was paid attention to, to the point that you really have to watch intently from the very beginning to see how even the smallest of details pay out as the show goes along. Everything was deliberate, and even the rules of how the mysterious walkie-talkie is used was well established. In a show like “Signal”, with the big cases, the overarching arc, and all the time mechanics that come into something like this, it is very easy for a lot of things to get messy, so it is a credit to the writer and director that everything was on point, and that it was easy for audiences to follow the different timelines the show was unfolding in.

Aside from that, the main and supporting cast of the show were just phenomenal. Jo Jin Woong was just perfect as the idealistic noble idiot of a cop who would do anything to fight for the truth; Kim Hye Soo pulled out all the stops in going through a whole range of emotions and with having to portray both the current and past versions of herself; and Lee Je Hoon was perfect as a cynical skeptic turned cop and profiler. I must admit that there were moments that I did feel that Lee Je Hoon was overacting a little bit, but it never brought me out of the scene or moment.

As a show, however,”Signal” was a great story that highlighted the power of choice, and how someone’s choices, whether it be a good or bad choice, and no matter how small it may be, can negatively impact a person or shape someone into being the good person he or she is today.

I am very much looking forward to a second season of “Signal”, and I hope that we will be able to get at least the main cast and the the original writer of the show on board. I do believe that there are still some questions to be answered, and it just feels like Jae Han’s, Hae Young’s, and Soo Hyun’s story isn’t done yet. However, I will only be on board if these conditions are met, and that it only goes up to a second season.

Now, you know the drill, from here on out there will be spoilers!

One of the things that was impressive during the show is how they were able to tackle all of these cases, manage to establish the ground rules for the mysterious walkie-talkie, and manage to keep track of all the details happening in every timeline,  without losing sight of the overarching story arc of the show- Jae Han’s disappearance and death, which is tied into the story arc of corrupt higher ups and people of influence. What is more impressive is that audience members could easily follow the timeline’s and the details stuffed into it without having our brains hurt, and with everything still being very grounded and established.

Hae Young’s story arc was all tied to getting closure for his brother’s death and for his being framed during the Inju Gang Rape Case in 1999.  Interestingly, we were able to see his character’s evolution through two different timelines. In the main timeline, we witnessed how he grew up to be cynical of the police force, even though he ended up being an officer himself. However, he never lost his sense of justice, and was always a good person to begin with. So, in a way, he did need a mentor like Jae Han who could remind him that he should never give up, no matter how bleak the situation is, and to continue fighting the good fight. In the new timeline at the end, Hae Young still remembered all of that, plus the fact that Jae Han changed the timeline to the point that Hae Young grew up loved by both his parents as Jae Han was able to clear his brother’s name a year after he died. However, thanks to that gesture, it was interesting to see that this new Hae Young still ended up becoming a police officer, maybe thanks to what Jae Han did.

Just like Hae Young, Soo Hyun needed a good mentor to guide her to become a force to be reckoned with, and it  was a good thing that that mentor was Jae Han. Aside from him being a good mentor to her, it was interesting to watch her evolution as a character from a rookie who didn’t know anything, to the hardened cop who still fights for justice, that she became. It was also fun to watch the evolution of Soo Hyun’s and Jae Han’s relationship from mentor and mentee, to friends, and to lovers, although the romance wasn’t that much highlighted in this drama.

Jae Han is probably the true hero of the show, as we watch him have unwavering determination to stay true and bring to justice those who deserve to be brought to justice ever since he started on the police force in the ’80s. A whole bulk of this series is actually determined by the choices that he makes in the past, and those choices, thankfully, allow for the future to be better than it was in the original timeline. I also liked the fact that the reason why he decided to live was because someone he had an emotional anchor to, Soo Hyun, was the one who warned him; and more importantly, because he can’t bear to see those unsolved cases in the original timeline to stay unsolved.

It was also interesting that no matter what they did, several things did remain constant in the new timeline- Hae Young’s brother still died;  and Jae Han although he didn’t die, still disappeared.

This show is definitely ripe for a second season due to the way they ended things. I have a feeling that if ever they do have a second season, it will pick up from there. Now, I only see two options at play here- that they manage to get there and reunite with Jae Han as he is escaping the hospital, walkie-talkie in hand; or they get there just as he escapes from Congressman Jang’s suited minions. Personally, as much as I do want them to reunite right away, I would go with the second option. Then, the rest of the series could have them still looking for Jae Han, although I do hope that somewhere in the middle of the season, they reunite and finally take down all the corrupt officials they are going up against.

Regardless of what will happen if there will be a second season, I just hope that the writer will be the same, the original main cast will come back, and that it will just be as good as its first season.

All in all, “Signal” is a great drama from start to finish that highlighted the power of choice and how it affects others negatively and positively; and is a great reminder to never give up hope, no matter how bleak the situation is. Aside from this, it is a solid drama that influenced the trends of the 2017 Korean drama landscape, and is one that will never get old, no matter how many times we watch it, or no matter what year we watch it in.

Have you seen “Signal”? Are you looking forward to a second season? Any theories about what will happen next to our heroes? Are there any other great dramas from 2016 and older (aside from “Healer” which is also in my to watch list) that I should be watching? Let me know in the comments below!