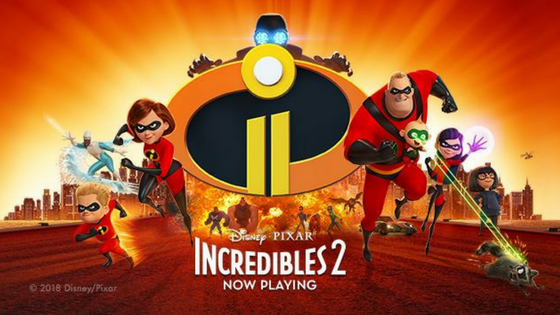 Before superheroes came into their own in the cultural zeitgeist of today, fourteen years ago, audiences were treated to a different kind of superhero movie with Disney Pixar’s “The Incredibles”. At the time, the notion of superheroes reigning supreme was just something that happened just once in a while, allowing us to be witness to this superhero family, and allowed its writers to talk a little bit about superheroes during that day and age. Finally, fourteen years later, we now have “The Incredibles” sequel that we deserve, as it is a fun ride that stands on the shoulders of the first film, that is a great PIXAR sequel, and doesn’t shy away from having themes that are very much ripe and appropriate for the current climate today.

Oh, and let’s not forget the newest PIXAR short, “Bao”, which was a wonderfully done story that definitely fits into the theme of family that the main feature has.

Both old and new fans of Disney PIXAR films and “The Incredibles” will definitely love this superhero family film. For newer fans, “The Incredibles 2” still stands out amidst all the superhero films that come out every year now; and for older fans who witnessed the evolution of Disney PIXAR films and those who are fans of “The Incredibles”, this movie doesn’t disappoint. Aside from the nostalgia factor as the first one was released in 2004, this is a movie in which those who watched the original film when they were younger will enjoy, and will also have a blast taking their children to watch it. Personally, I remember watching “The Incredibles” in the cinemas when I was a teenager, and fast forward fourteen years later, the original one is still one of my favorite Disney PIXAR films; and I was able to enjoy the film not only from a child’s point of view, but from a more adult point of view as well.

“The Incredibles 2” picks up where the first one left off, with the Underminer trying to take control of the city, and with our favorite superhero family rushing in to save the day. However, things don’t go as smoothly, and the family ends up dealing with the consequences as superheroes are still illegal. Things, though, are about to change as Winston Deaver (Bob Odenkirk), a billionaire who loves superheroes decides to help them out by changing the perception of the world to make superheroes legal again by using Elastigirl or Mrs. Incredible/Helen Parr  (Holly Hunter) to change their image, which she does, especially as a new villain, the Screenslaver, emerges out of the shadows. While this is happening,  Mr. Incredible/Robert “Bob” Parr (Craig T. Nelson), commits to being a full time dad, and tries to juggle household chores, understanding the complicated emotions of his teenage daughter, the advent of New Math, and the burgeoning powers of his youngest son, Jack-Jack.

The film was a fantastic and fun ride. It had great action sequences; hilarious moments that made me laugh out loud, especially when it came to Jack-Jack, who pretty much stole the show without undermining the main plot; gorgeous visuals; great performances; and the animation looked the same as the first film and even better. The story itself was simple to follow, and although adults could see the villain twist from a mile away, it didn’t really matter, or make the movie weaker. Also, it had the return of old favorites like Edna Mode (Brad Bird) and Frozone (Samuel L. Jackson); great new characters; and a wonderful score by Michael Giacchino.

In 2004, the first movie, given the status of superheroes in film at that time, was ripe to talk about it and poke a little bit of fun at it as well. This time, they were also able to subtly talk about topics and themes that are also very much appropriate for the current cultural climate. They talked about the importance of the wife at home; parenthood;  the changing gender roles in the work place; the importance of dads and the whole concept of house husbands; the fact that if misused technology and anything that brings us ease and comfort can make is mediocre and lazy; adolescence, and how even though teens may lash out and be complicated, you still fulfill your role in your family; and of course, family.

All in all, “The Incredibles 2” was a fantastic sequel, and although it isn’t a perfect movie, is a delight for kids and adults alike.

It’s amazing how that even though fourteen years has already past, when the movie picks up, it almost feels like it was just yesterday. But because of that, everything else that happened in the movie felt like a natural progression when it comes to the story and what all the main characters went through here.

Although superheroes are still illegal in their world, it was interesting that Winston Deaver (Bob Odenkirk) was the embodiment of the modern day superhero and pop-culture fan, who perceives superheroes as symbols of hope. Interestingly enough, there’s also the cynic and anti-fan in Evelyn Deaver (Catherine Keener), who somehow represents everyone who believes that superheroes and anything that allows people to have more comfort and ease can cause people to become weak and lazy. While she does have a point, there can always be a happy medium, in which people can solve some things on their own, but when they can’t, that’s when technology or superheroes step in to save the day.

Most adults will have seen Evelyn being the Screenslaver from the minute the siblings talked about how their father died, but it still didn’t detract from what Evelyn was trying to point, and it didn’t compromise the movie as a whole either.

In the first movie, there was a lot of focus on Mr. Incredible/Robert “Bob” Parr (Craig T. Nelson) as a superhero, which is why it was refreshing that they decided to highlight Elastigirl/Mrs. Incredible/Helen Parr (Holly Hunter) this time around. Seeing her fight crime and saving the day was just awesome, and it allowed animators to go crazy with creativity, especially during the train chase sequence in which she used her elastic body to make herself go faster and to allow the bike to use the surfaces of buildings and the like to catch up to it.

The deeper story here, however, is how Bob handled being a house husband, what with trying to juggle everything from handling teenage girl emotions, to Dash’s (Huck Milner) New Math lessons, all the way to Jack-Jack’s ever increasing powers. Here, we see that it isn’t easy managing a household, because once you think you’ve done everything, something else always crops up.

Jack-Jack was the clear stand out  in the movie, because aside from Bob’s struggles, Jack-Jack’s antics kept the audience laughing out loud the entire time. It was interesting that this super powered baby had multiple powers, and it just makes sense that a super powered baby would have infinite potential. However, despite all of that, it never detracted or outshone the main plot of the movie. My personal favorite scenes, however, include any time Jack-Jack and Edna Mode (Brad Bird) are together.

It was also great that in the end, it was up to the kids to help knock Frozone (Samuel L. Jackson) and their parents out of the influence of the Screenslaver. This was interesting as both Violet and Dash were annoyed at not really being able to use their powers, but here, they were able to step up to the plate, and worked well together as a team, although they did fail a bit at keeping taking care of Jack-Jack.

Since this movie had a lot to do with making superheroes legal again, it was interesting to see the different superheroes that they come up with for the movie, and even better, they were used a lot in the final battles against Evelyn/Screenslaver.

Frozone was given much more to do here as well from start to finish.

Now, while there isn’t any post-credits scene, if you do stay a little bit into the credits, they do play the individual theme songs of Elastigirl, Frozone and Mr. Incredible, which was just amazing.

“The Incredibles 2” was definitely worth the fourteen year wait, and a great Disney PIXAR sequel, that wasn’t just a fun ride, but was also fully loaded with meaningful themes and topics without bashing you on the head about it. It was definitely a great family movie that will definitely go down in history, and truly worthy of being in the “Incredibles” franchise.

Have you seen “The Incredibles 2”? What did you think of it? Did you think it was worth the fourteen year wait? Let me know what you think in the comments below!