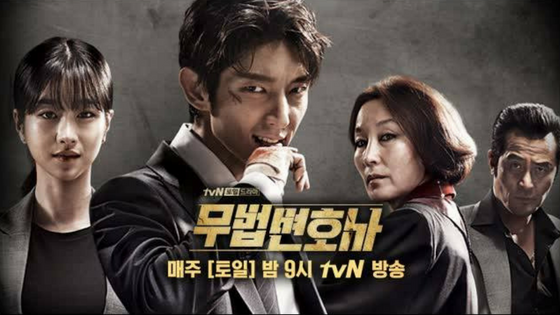 Lawyers, gangsters, rogue agents, detectives and judges are several things that Korean dramas have been rife with recently. When it comes to the legal/thriller/crime genre, many times, we try to look for something new, whether it be a new concept or a tightly written plot that surprises the audience all the way until the end. However, it does say something about a show when it falls back on all the things that revenge legal thrillers have while still surprising us with the many twists and turns that the protagonists need to go through to achieve their end goal, and with villains so deliciously bad that they have become villains immortalized in my own little Kdrama hall of fame. “Lawless Lawyer” did all that, allowing us viewers to just sit back and relax and just enjoy the fun ride all the way until the end.

“Lawless Lawyer” ran from May 12 to July 1, 2018 for sixteen episodes on tvN. It was written by Yoon Hyun Ho and directed by Kim Jin Min. It also starred Hallyu star Lee Joon Gi.

The series follows Atty. Bong Sang Pil (Lee Joon Gi), a gangster turned lawyer, who returns to his hometown, the Gotham-like city of Kiseong, where he teams up with a young and promising lawyer named Ha Jae I (Seo Ye Ji), in order to take down those in power in Kiseong, who had something to do with Sang Pil’s mother’s death and Jae I’s mother’s mysterious disappearance. The rest of the series follows Sang Pil, Jae I, and their “Lawless Law Firm”, as they go on a journey to rid Kiseong of its corrupt leaders, and to finally get justice for their mothers and those who have been victimized by those in power.

There were moments in which the production quality wasn’t that great, like some sequences were a bit too fast and confusing, there were shaky cam moments I really didn’t like, and there were moments that took me too much by surprise, but all of that didn’t detract for how fun it was to watch Sang Pil, Jae I, and their law firm rooting out the evil that was in Kiseong once and for all. The entire series felt like a fun legal thriller/action movie in which you could just sit back, relax, have some popcorn and just enjoy the ride all the way until the end.

Aside from the fun story line, it was interesting how strong all the female characters in this show were written, without it feeling too one the nose or pandering.

The villains, specifically the two main villains of the series were just a delight to watch, because not only did they just steal the show every time they were around, but the way they thought and acted upon their plans to obtain more power and greed were just amazing. In particular, the main villain had such a level of cunning that I haven’t seen before yet in Korean dramas, to the point that the villain anticipated almost every twist and turn that could happen.

Aside from this, I like how they did touch on the fact that sometimes people just blindly worship political leaders or even those respected in their fields, giving them so much power that in turn can be abused by them. It’s a sad fact of life as that really does happen today.

This was my first time to actually see Lee Joon Gi in anything, and I was pleasantly surprised. Not only was his performance good, but he truly fit the bill of a tongue in cheek former gangster turned lawyer with charm, bravado, and a water tight plan which allowed for enough wiggle room just in case things didn’t go his way. I am now definitely looking forward to watching more of his work, including “Moon Lovers: Scarlet Heart Ryeo”.

Seo Ye Jin was great as Jae I, and I thought that the two did have an easy chemistry with each other. She was also given a lot to work with in terms of range with her emotions, and I thought she did well to the point that I am looking forward to watching her in last year’s “Save Me”.

All in all, “Lawless Lawyer” felt like a great legal thriller/action movie, with memorable character and villains, in which you could just sit back, relax and enjoy the ride all the way until the end.

Now, you know the drill! Beyond this point, there will be spoilers!

Although this series did have a lot of old tropes, it was interesting how the presentation or the execution of it was still refreshing; and it is amazing how this show could have seriously become campy in a bad way, but it never felt that way in the long run.

Both Sang Pil and Jae I had story lines that were very familiar- they both had a parent whom they lost as kids, and because of that they decided to become strong and ended up as lawyers. However, despite that, they were still able to keep it fresh and interesting, with the main villain, Judge Cha Moon Sook (Lee Hye Young) becoming a mother figure to Jae I; and with Sang Pil being taken in by his uncle, the leader of a known gang.

This show also has a way of giving us things that we really have to pause and think about a bit before an event, or something sits in. I felt this the most with the seemingly fast romance between Sang Pil and Jae I, and when our protagonists or villains think quick on their feet so that their own plans would be able to push forward.

For the romance angle, many felt it came out of the left field, but if you take a look at it, Sang Pil has been watching and protecting Jae I for a long time, so it’s no wonder he fell for her; and as for her, that knowledge, plus the shared pain that they both experienced is enough for her to feel like he along can understand what she went through and how she feels. As for the latter, I really had to pause and think, and once things sunk in, it amazed me at how clever both Moon Sook and Sang Pil are at manipulating situations to their advantage.

I also like that Jae I and Sang Pil had actually met in Kiseong as kids before, but they didn’t know who they were, and I’m glad that they only showed that at the very end.

Of course there was the age old bit with a lot of noble idiocy but sometimes, a Korean drama just can’t stay away at times from that old trope.

Cha Moon Sook was such a deliciously evil villain that it became such a delight to see how deep her plans were laid, and how she tried to outsmart Sang Pil and Jae I every single time. Because of this, Moon Sook has become one of the smartest and most cunning villains I have ever met in a Korean drama.

While Moon Sook is cunning, Choi Min Soo’s Ahn Oh Joo was a delight to watch as he fought to stay in power every step of the way, and how he fought to take down the one person who held him a tight leash. Aside from this, he was fearless, had a misplaced sense of bravado, and I was amazed that they allowed him to be THAT violent on television.

Aside from this, if you remove the trappings of the drama itself, you’ll find that this drama actually touches upon how hero worship of leaders, no matter whether they political or not, can sometimes blind you to their true natures, and sometimes, it might enable them to use that power and influence for their own gain and later on abuse it. The sad thing is that this has been happening all around us, but many either just turn a blind eye to it and continue worshiping those in power who are corrupt, or not do anything about it. And this is why we do need stories like this, to remind us and to give us hope that no matter what, despite everything, one day, the truth will definitely come out and those who deserve judgement will get what is due to them in the long run.

In the end, “Lawless Lawyer” was definitely a fun ride through and through, with great performances, interesting characters, great villains, and a city that is a character unto itself.

Have you seen “Lawless Lawyer”? What did you think of it? Let me know what you think in the comments below!

My first Kpop concert experience was a great one! Go Go Gfriend in Manila 2019 last Aug. 25,2019 was amazing & I can’t wait to attend more Kpop concerts in the future! Read more about my experience in my latest Blog post, link in bio. @newfrontiertheater @_mymusictaste @gfriendofficial #gogogfriend #gogogfriendinmanila #mymusictaste #newfrontiertheater #gfriendbuddy #kpop #kpopconcert 📸 @celannemiranda
Finally wrapping up the last of my Seventeen albums from my June 2019 haul- You Made My Dawn Eternal Sunshine version! I pulled The 8’s lenticular, Minggyu’s & DK’s photocards, and DK’s behind the scene folding card. #june2019 #kpop #haul #haulpost #seventeen #carat
The Dawn version of “You Made My Dawn”. I got Mingyu’s lenticular,Vernon’s behind the scene card, and DK’s & The 8’s photocards. #caratseventeen @saythename_17 #kpop #haul
“You Made My Dawn”, Before Dawn version. “Home” is another song that made me love this group. I pulled Jeonghan’s lenticular, The 8’s behind the scenes card, an S.Coups photocard, and I was overjoyed to pull Joshua’s card as he Is my first bias. @saythename_17 #seventeencarat #kpop #haul