Action is a film genre that comes in many forms, and every country has their own version of the action film, from fast car chase scenes to epic fight sequences. It can have a complex plot which sets up and whose narrative weaves through the action sequences; or the entire movie can just be about the spectacle and the action itself. When it comes to Philippine action cinema, director Erik Matti, with his latest release, “Buy Bust”, was able to blend political commentary into his most ambitious project, therefore stepping up the genre in the local film industry, and solidifying himself as the king of the modern action Filipino film. Aside from this, he was also able to open up different kinds of roles for women in film, as Anne Curtis plays against type and succeeds in becoming the first ever Filipina heroine in a local action film. And while it isn’t perfect, the entire film drives a clear message home to the local audience with its visceral action sequences, and the desperation felt within the entire film.

“Buy Bust” was directed by Erik Matti, who directed the highly praised neo noir crime film, “On the Job”; with a screenplay written Anton Santamaria and Matti, based on a story by Matti himself. It was scored by Erwin Romulo and Malek Lopez, with cinematography by Neil Derrick Bion and edited by Jay Halili. The entire film took $1.6 million to make, the production began in 2016, and the entire thing was filmed in fifty-six days. It premiered on June 29, 2018 at the New York Asian Film Festival (NYAFF), was released in the Philippines on August 1, 2018, and will have a limited release in the US starting from August 10, 2018.

The film’s plot is fairly straightforward, as it follows an elite government anti-drug squad who end up spending an entire hellish night in a city slum, after their “buy bust” operation (an operation where undercover  agents are sent to lure out the big fish) goes horribly wrong and they end up being trapped inside the slum by the slum settlers and the drug ring they were going after. Trapped inside, the squad fights for survival to get out before they are all picked off on by one. However, within the main squad, the film mostly focuses on Rico Yatco (Brandon Vera) and Nina Manigan (Anne Curtis), a sharpshooter who survived a previous buy bust gone wrong wherein she came out as the only survivor. Aside from the epic fight sequences that happen in the maze-like slums, the film sees Manigan trying to figure out who exactly set them up and her old squad to die.

As a film, in the more international setting, many might find fault with the sparse dialogue, and the fact that a lot of background information isn’t really given to the audience. The fight sequences are epic and ambitious, full of practical effects and raw unfiltered fight sequences that are desperate and rough to match the grittiness of the character of the film, instead of choreographed sequences that are smooth and slick. However, they were all well done, and the film held nothing back it terms of violence and blood, and the punches just kept on coming that in the end, you will feel just as exhausted as Manigan and Yatco as they fought desperately to survive.

The production itself was a spectacle to behold with its pyrotechnics and practical effects, the amount of fight training that was done to prepare the actors for the film, and the entire set of the city slum itself was just something else. They actually built the entire maze-like city slum for the film, and had all the action sequences filmed with all the effects with the actors, while having rain thrown into it as well. The result of the work that the production team put in combined with Bion’s cinematography and Halili’s editing allowed the audience to understand and feel the claustrophobia, the madness, the confusion and the desperation that this squad must have felt. 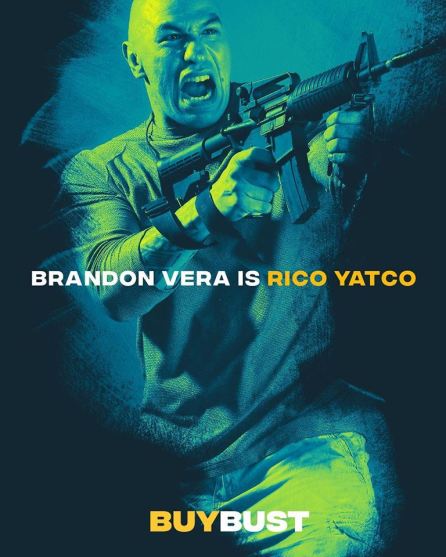 Anne Curtis proved herself as a wonderful actress in this film, as she played against her usual romantic-comedy type, and morphed into the first Filipino action heroine, whose past does haunt her. Brandon Vera held his own as well,  considering that this was his very first acting gig.

The rest of the cast were brilliant as well, with a good mix of veterans such as Victor Neri and Nonie Buencamino, with the new, such as Arjo Atayde, Sheenly Gener, Mara Lopez, Tarek El Tayech and Mara Lopez. Joross Gamboa shone as the quirky trigger happy Manok (Chicken), Levi Ignacio was intimidating as Boss Chongki, Alex Calleja brought a mixture of seriousness and dark humor as Teban, and Lao Rodriguez played the usual untrustworthy cop well.

To a more international audience, this film will definitely delight genre fans, but it takes upon a whole other meaning of its own when you take a look at the core message of the film and what it intended to portray especially with what is happening in the Philippines now.

It is a commentary on the “War on Drugs” happening now and it strives to show us the inhumanity of it all- the countless innocent lives that end up being lost while getting into the crossfire of it all because of those with power (corrupt officials and big drug rings/gangs), which include the lives of police officers just doing their jobs correctly and innocent civilians. This film portrays all of this and the never ending cycle of violence that now has the country and Metro Manila in its grips by ramping up everything by making it seem almost surreal with the angry and frenzied masses of city slum settlers morphing into one huge lynch mob that inflicts wave after wave of violence, and the brutal tactics of the ring/gang in question.

Aside from seeing the devastating effects on those around them, it forces the audience to come out of their comfort zones as they witness the harsh reality of it all, and how those in power can just as easily cover things like this up.

“Buy Bust” will definitely delight action genre fans, but when its core message is looked into, its one that hits very close to home with local audiences, and helps open our eyes to the harsh and stark reality of what is happening around us everyday.

Seeing Anne Curtis play against type was such a delight to see, and it was amazing how she was able to hold her own in playing a sharpshooter whose past haunts her, and who can take blow after blow, and deliver punch after punch all the way until the very last few seconds of the film. It was also interesting that this character, Manigan, was no-nonsense, no holds barred, and was very straightforward and a bit unpredictable. Seeing all the work that Curtis put into this character, plus her acting, allowed her to prove that she is capable of holding her own in different genres of movies aside from romantic-comedies.

Manigan, for me, is also an iconic Filipina character, as this is the very first Filipina action heroin, which really does open up a lot of doors in terms of diversity of roles for women in the local film industry.

It was also interesting that in the end, she decided to take action herself in killing the real traitor, Director Alvarez (Nonie Buencamino), although she also didn’t have much of a choice he was also going to kill her in order to cover everything that happened up. But the sad reality is that even though one corrupt person is eliminated, it does nothing to stop the cycle from repeating itself and continuing on.

What was also really sad was the fact that even the media feeds us lies, as seen with the fact that a news broadcast was heard in the end, announcing that only thirteen people died, while the camera panned over an aerial view of the city slum filled with piles of dead bodies.

As mentioned earlier, the film is very topical, and its setting and the way the groups of people were presented were cranked up by several notches in order to drive the point home that this “War on Drugs” is truly a manipulated war, and the ones who are caught in the crossfire are the innocent civilians and the police officers who are just truly doing their jobs.

One can sense the desperation in how frenzied the city slum settlers were against the drug gang/ring itself and the squad.

The entire way the ambience was set up, from making us feel as claustrophobic as the squad; and later on, the frenzied confusion with molotov cocktails, fire, noise, and the frenzied masses that seemed to morph into an army of relentless angry zombies, really allowed the audience to experience not only the desperation of the masses and the officers in the film, but made the audience realize that this is how it also might feel in reality. In fact, at a certain point, it felt almost surreal, but I think that that was the point. Many might also complain that there was just one round of violence too much, but piling action scene upon action scene actually mirrors what is happening in reality, that there are no breaks, and this happens all the time, almost every day.

Aside from this, the camera work and choreography at points was just wonderful and in perfect sync, especially when the camera, towards the latter part, shifts to Manigan and follows her going through the maze of a slum while fighting off wave after wave of different kinds of people, from the streets all the way to the rooftops.

Matti has mentioned that this was his most ambitious project yet, and although the plot is simple, the dialogue is sparse and there are points that can be improved upon; the attention to detail in the set, the cinematography, the editing, and all the rough and raw frenzied fighting showed the audience how much work, time and effort was put into this film.

It also showed the local film industry that we can have strong heroines in action films, and that good action films can be done, even without the help of CGI. It also adds to the library of the modern Filipino action movie, which get darker, more cynical and send strong messages about what is happening in our country today.

Have you seen “Buy Bust”? What did you think about it? Let me know what you think in the comments below!